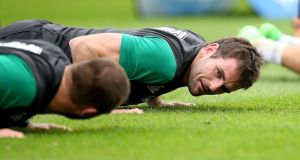 This is going to seem strangely unfamiliar alright. For the first time in a home Test since Ireland beat Italy at Lansdowne Road in April 1999, neither Brian O’Driscoll nor Gordon D’Arcy will play a part.

As expected, Joe Schmidt has instead opted for a brand new pairing in Robbie Henshaw, starting only his second game at inside centre and second at Test level, and the recently naturalised debutant Jared Payne.

Rob Henderson and Kevin Maggs were the midfield combination that day over 15 years ago, but since O’Driscoll broke into the team in Australia in 1999, and made his first appearance in a home Test in the World Cup warm-up win over Argentina in August of that year, one or other of the duo (and more often both) have played some part in every one of Ireland’s last 80 home Tests.

The 21-year-old Henshaw and 29-year-old Payne will bring a whole new dynamic, and outside Johnny Sexton and indeed Conor Murray, will provide a physically strong 9-10-12-13 axis against a Springboks team which, for all its new-found adventure, first and foremost will test Ireland close in on the gain line.

The aforementioned physicality was not “the motivation” for the selection, but it was a factor, as was the greater time the Henshaw-Payne combination had together given D’Arcy, who will come back into the mix over the month, was sidelined last week.

“So this combination obviously won’t last throughout the series but I’m reasonably excited about seeing how they do adapt and equip themselves in an incredibly challenging environment.”

Highlighting how the Boks’ centres or blindside wingers will make this “an incredibly challenging game for them,” Schmidt said: “But they want to be measured by it and I’m looking forward to seeing how they measure up. I guess it’s incredibly difficult [to know].

As for Henshaw’s readiness for an unfamiliar role in the more rarefied air of Test match rugby and against the second best side in the world, Schmidt said: “He’s as ready as he’s going to be after three caps and I think he’ll be more ready after 10 caps, that’s the nature of it.

“We all know that when put in a circumstance that we haven’t been in often, that we’re a little bit more tense, a little bit more uncomfortable and that does dissipate a little although tension is forever relevant for any Test match player.”

“I think we will see continued improvement, but when do you start that staircase? We need to start now with Robbie and a number of other guys and that’s why through this series there will be changes week to week.”

Although 17 Test players plus Nathan White have been sidelined for this match, Schmidt can still call upon nine of the team that started the Six Nations finale in Paris, the other exceptions being Jack McGrath and Sean Cronin in the front row, as well as Simon Zebo (who started both Tests in Argentina) and Tommy Bowe (who last appeared against New Zealand a year ago).

“Yeah, if we played seven-a -side that would be perfect,” he quipped a little forlornly.

In particular, he compared Ireland’s two one-day get-togethers and five full sessions over the last two weeks to South Africa’s six-match Rugby Championship campaign in the interim. He thus had a valid point suggesting these Boks will be more fully loaded than the All Blacks at the end of November last year.

“To be absolutely frank this is a fresh team, fresh off the plane. We got the All Blacks after 14 Test matches, probably with an eye to getting back and getting a rest.

“I think we probably did catch them on the hop a little bit in that first half. I think we merited a fair bit of what we got but we also got a little bit lucky that they were a bit under par on the day.”

“I just don’t see that happening with the Springboks. I think they have, particularly over the last 90 minutes of rugby they played, been incredibly good and I think it’s going to be very, very difficult to knock them over, even if we come up with our best performance.”

“It means I’ve had a lot more good luck messages from New Zealand than I normally would.

“For some time they have been couple of heavyweights that go toe to toe and probably quite like it when someone from a different weight division pops up and makes a good hit.”

“We’d love to be competitive with them and that’s across the board.

1 Matt Williams: Expect the unexpected in rugby’s greatest tournament
2 Owen Doyle: Creeping professionalism of schools rugby a threat to the game
3 Gary Neville in Qatar an exercise in semi-journalism
4 New FAI president set to be elected on Saturday
5 Big difference between boxing and MMA is ‘effort-to-pause ratio’
Real news has value SUBSCRIBE