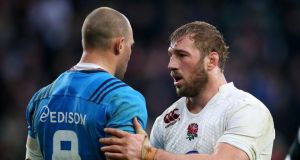 Chris Robshaw has conceded England’s preparation for their Six Nations win over Italy was hampered by the afterglow of their opening win over Wales. (Photograph: INPHO/Cathal Noonan)

Chris Robshaw knows England’s pursuit of the Grand Slam will be ruined by Ireland if their build-up to the Dublin showdown is anything other than perfect.

The RBS 6 Nations’ only unbeaten teams will collide on March 1 in a third-round appointment pivotal to the outcome of the title race.

England continued to plot their route to a first Championship crown under Stuart Lancaster by dispatching Italy 47-17 at Twickenham, engineering six tries in an emphatic winning score that could prove critical.

But by their own admission it was a flawed victory, with the leaking of three tries and the gifting of an early lead against outclassed opposition the chief shortcomings to be addressed over the next fortnight.

Robshaw has revealed England’s preparations for the curtain raiser to World Cup year at Twickenham were temporarily affected by the afterglow of their outstanding victory over Wales.

“For the first couple of days after Cardiff you did see bit of an emotional hangover, so to speak. But come Thursday and Friday we were spot on,” Robshaw said.

“We need to be right on the button mentally for Ireland. They’re an extremely good side who have an extremely smart coach in Joe Schmidt. He generally finds weaknesses somewhere.

“It’s about making sure we’re clued up, that everyone does their job as well as possible when we get there.

“And the details need to be spot on because we need to try and find their weaknesses as well.

“We got the result we wanted against Italy. We know we weren’t great at times, but to get a good scoreline like that and get what we wanted out of the game was very promising.

“Every game is decisive. You need to make sure you beat what’s in front of you and that’s what we did.”

Jonathan Joseph continued to argue an irresistible case for being England’s outside centre at the World Cup with two terrific tries, while Billy Vunipola, Ben Youngs, Danny Cipriani and Nick Easter also crossed.

Souring the afternoon, however, were the three tries Italy produced through Luca Morisi, who touched down twice, and Sergio Parisse, each of them well constructed but also preventable.

“Defence is one of those areas we pride ourselves on, so to give away a couple of soft tries......” Robshaw said.

“I’m not sure why we conceded early again. As soon as they got hold of the ball they made easy yards and Parisse got over in the corner.

“We were a little bit passive defensively throughout the whole game. Maybe it’s an area for us to look at and potentially see why we’re starting slowly.

“I’m sure that if we don’t sort it out, other teams will try to exploit it.”

Defensive lapses permitting, England were able to celebrate the brilliance of Joseph, who has emerged as the Six Nations’ outstanding talent after two rounds.

“Jonathan has done well. He’s been a good player and has a spark about him,” Robshaw said.

“A lot of the young guys stepping in have accepted the challenge thrown their way and grabbed their chance with both hands.”