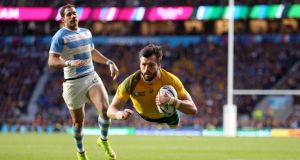 The Pumas will go home to a heroic welcome after next Friday’s bronze play-off, and will do so as the great entertainers of this World Cup. An outstanding World Cup was treated to a thrilling semi-final which, for pure running rugby – indeed wildly unstructured running thanks to the Pumas – this was perhaps the match of the tournament.

With Nicolas Sanchez, Santiago Cordero, Joaquin Tuculet and their merry band of marauders willing to have a go from anywhere, it says everything for their approach that the 80,000 crowd were hailing the losers in the endgame.

Ultimately though, the Wallabies scored four tries while keeping their try line intact, despite the Pumas making 13 line breaks to seven. But under Nathan Grey’s tutelage, Australia scrambled for their lives, while their finishing was way more clinical, with Adam Ashley-Cooper helping himself to a hat-trick. Not even Wayne Barnes could ruin this game, although the Pumas fans were embittered by some decisions, notably the binning of Tomas Lavanini, as Australia won for the 13th time out of 13 with with the Englishman as referee.

Los Pumas were true to their word in playing with ambition, but in truth they were too reckless for their own good. The Wallabies, altogether wilier, read them like an open book. Furthermore, the defensive frailties, exposed by Namibia as much as Ireland, were all too evident. The Wallabies scrum took a beating, but David Pocock was outstanding, as was the comparatively unheralded Scott Fardy, especially in defence.

After the contrast between an inventive and a patterned side, here was a clash between two teams who were prepared to have a go right from the kick-off. In truth though, the Pumas approach was way too risky for the opening stanza of a World Cup semi-final.

In a breathless tit-for-tat opening exchange, both teams had attacks and Ashley-Cooper had nearly picked off one intercept when Rob Simmons read (and must have been prepared for) an inside pass by Sanchez inside the Pumas 10-metre line to gallop in under the posts.

Argentina did respond with a clean break by Marcelo Bosch courtesy of a wonderful pass by Juan Martin Hernandez, the move lacking for a support runner when Bernard Foley made the tackle. He didn’t roll away though, and Sanchez kicked the penalty.

But after Cordero knocked on from an ill-advised quick tap inside his own 22, Australia swiftly struck again. Tevita Kuridrani and Israel Folau ran hard off a scrum, but instead Foley threw a wondrous skip pass for Ashley-Cooper to slide in by the flag. The Pumas, defending narrowly, bought the decoy runners and Foley added the touchline conversion.

Save for the Bosch break and Sanchez penalty, little had gone right for the Pumas. Tuculet and Hernandez both needed treatment early on. The latter had been hit hard and late by Pocock when putting Bosch through, and limped off early in the second half.

But after 14 minutes there was cause for their fans’ first chant and first sighting of a singing and crest-pumping Diego Maradona, draped in an Argentinian flag, in the stands. The impish Cordero, facing his own line, dummied a pass inside which Ashley-Cooper bought and somehow found touch on half-way. But their world-class finisher Juan Imhoff was forced off with concussion.

The Pumas scrum was a source of strength, and James Slipper buckled under pressure for Sanchez to make it 14-6. Then Barnes assumed centre stage, as the English barrister does, repeatedly going back on a low flying tackle by Lavanini on the counter-attacking Folau. Barnes seemed to change his mind in adjudging it a no-arms tackle. It showed no empathy for the game at all. Worse followed for the Pumas as their captain Agustin Creevy (unable to train all week) was forced off before Australia ruthlessly sized up their 14-man opponents.

Set up similarly at a scrum for their first try, this time when Foley and Folau went to the right, the fullback came hard and late onto the outhalf’s pass. A couple of phases later Folau beat two men and was nearly in, but they maintained their shape, lines of running and options before Ashley-Cooper scored from Matt Giteau’s long skip pass.

The 21-year-old Cordero took a super line as first receiver off Martin Landajo to beat Ashley-Cooper on his inside and then stepped Drew Mitchell. Will Genia made the scrambling recovery tackle as Cordero offloaded to Hernandez, whose one-handed offload when tackled by Foley, just eluded Tuculet for what would have been a brilliant and brilliantly timed try. Instead, the Wallabies’ scramble defence ensured a 19-9 interval lead.

After Foley missed a penalty the Pumas were lifted by another big scrum for Sanchez to make it 19-12, but Juan Martin Fernandez Lobbe went off his feet for Foley to restore the 10-point lead.

Undeterred, the Pumas ran from everywhere. Cordero’s footwork was mesmeric, Sanchez probed, Fernandez Lobbe seemed to be playing like a midfielder, Fernando Isa was straight into it and Tuqulet countered to leave a trail of gold in his wake.

The crowd joined in with the Argentinian fans to chants of “Argentina”, and “Ole Ole Ole, Pumas, Pumas”. By now Maradona couldn’t watch. Barnes penalised Simmons for tackling in the air at a lineout for Sanchez to make it 22-15. And they kept coming, running and probing at the gold line, Lucas Gonzalez Amorosino making a thrilling break and the Pumas going through 11 phases before turning the ball over. Sanchez had another as they came again.

Cue a rabbit out of the Wallabies hat, straight off the training ground with a generous sprinkling of individual brilliance. From a maul on half-way, Genia went back on the short side with a skip pass to Mitchell. Cordero had given him too much space on the outside, and Mitchell came infield to beat six tackles before passing out of the tackle for Ashley-Cooper to walk in his hat-trick.

Game over. Not even these wonderfully fearless and resilient Pumas could recover from that.