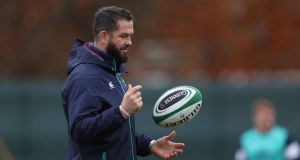 Andy Farrell is expected to be confirmed on Wednesday as the Lions’ defence coach for this summer’s demanding and daunting tour to New Zealand, thereby releasing him from duty for Ireland’s tour to the USA and Japan.

Warren Gatland will unveil his coaching ticket for the 10-match, three-Test tour at the customary Irish base of the Carton House Hotel in Maynooth on Wednesday afternoon and Farrell, having fulfilled the same brief on the successful tour to Australia three years ago, was always the front-runner to oversee the Lions’ defence.

Rob Howley, the backs coach and current stand-in head coach with Wales in Gatland’s absence, is also likely to be retained as the Lions back coach, having also filled that role in Australia four years ago. It is understood that both Joe Schmidt and the in-coming Scottish head coach Gregor Townsend had been sounded out about their availability, but they are committed to overseeing summer tours by their respective national sides.

The former Saracens and England captain Steve Borthwick, who made such an impression with Japan at last year’s World Cup, before being co-opted into Eddie Jones’ England coaching ticket, is expected to be named as the Lions’ forwards coach. Aside from ensuring a degree of continuity from four years ago, this trio also ensures representation from the Irish, Welsh and English coaching teams.

Given the demands of the tour, it is highly conceivable that the coaching load will at times be shared, if not quite to the extent of 2005 when Clive Woodward effectively brought two distinct coaching tickets, with this potentially leaving room for at least one or two more coaches being brought along.

Rumours have swirled in the last couple of days of a surprise inclusion in the coaching ticket from outside the four Home Union’s coaching set-ups. It will, however, be a surprise if there any bolters or surprises when Gatland makes his announcement in the Carton House.

Another couple of notable Irish inclusions are expected to feature, namely the former Irish team doctor Dr Eanna Falvey, who is in line to succeed the Scottish team doctor, Dr James Robson as the tourists head doctor, after serving alongside Robson in Australia in 2013. The latter has been the Lions team doctor for six tours.

Paddy ‘Rala’ O’Reilly, who served as the Irish bagman for 21 years before he retired after last year’s World Cup, will fulfil that role for the Lions, Gatland having worked with him during his time as Irish coach.