All Blacks outhalf Aaron Cruden out of World Cup 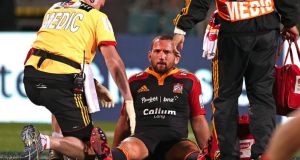 All Black Aaron Cruden will miss the World Cup after injuring his knee. Photograph: Getty

All Blacks fly-half Aaron Cruden is almost certain to miss the World Cup after scans revealed the need for knee surgery that will sideline him for at least six months.

The 26-year-old, who has played 37 Tests for New Zealand, injured his left knee in the first half of Waikato Chiefs’ 26-9 Super Rugby victory over Canterbury Crusaders on Friday.

“Aaron Cruden has ruptured the anterior cruciate ligament on his left knee. He will see a surgeon on Wednesday to arrange a knee reconstruction in the coming weeks,” the Chiefs said in a statement.

“Traditional reconstruction surgery has been deemed to be the most appropriate given Aaron’s young age and long-term career prospects. The expected return to play time for this sort of surgery is six months.“

That recuperation schedule rules him out of the rest of the Super Rugby season and makes it almost certain that he will play no part in the World Cup in England, which runs from 18 September 18 to 31 October.

Cruden was initially left out of the squad for New Zealand’s triumphant World Cup campaign on home soil four years ago but drafted in after Dan Carter suffered a groin injury.

A subsequent injury to Colin Slade saw him claim the number 10 jersey for the semi-final and final and he played the first half an hour of the title decider against France before suffering another knee injury.

Carter and Slade remain options at fly-half for New Zealand, as does in-form Wellington Hurricanes playmaker Beauden Barrett, but the loss of Cruden is a big blow to coach Steve Hansen.

Cruden started eight Tests last year while Carter enjoyed a sabbatical and Hansen will not have forgotten that the All Blacks finished the 2011 campaign with fourth choice Stephen Donald in the pivot role.