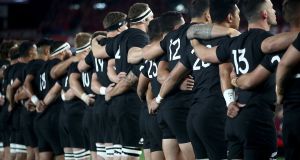 The All Blacks were far superiour to the Lions at Eden Park. Photo: Phil Walter/Getty Images

Ben Smith: One fine high ball catch was a standout moment shortly before his departure with a HIA, from which he failed to return. Rating: 6

Israel Dagg: He did brilliantly to get back and prevent Daly from scoring a try in the opening moments and was conspicuous when the Lions enjoyed their fine start. A dodgy pass for Cody Taylor’s try but a brilliant one for Ioane’s first. Rating: 7

Ryan Crotty: He had started the game superbly and was proving a real handful for the Lions with his range of passing and angles of running before limping off with a hamstring injury. Rating: 6

Sonny Bill Williams: At one point he had mustered 11 gain-line successes and a couple of offloads and was no less authoritative in his tackling. Rating: 7

Rieko Ioane: The 20-year-old capped a fine performance with a brace of tries, the second of which demonstrated his scary pace; fully vindicated his selection. Rating: 8

Beauden Barrett: His strike-rate of 70 per cent in terms of test match place-kicking stats is regarded as his only weakness, but faultless on the night and it complemented the rest of his game whether at outhalf or fullback. Rating: 7

Aaron Smith: A truly brilliant performance from the scrumhalf, who was sharp, lively, with a vision and awareness that invariably led him to first choose and then execute the right option. Rating: 9

Joe Moody: Nine tackles, five carries, a rock solid scrum, all of which contributed handsomely to his team’s final output for the 53-minutes he was on the pitch. Rating: 7

Cody Taylor: He demonstrated the hands of a slip fielder to hang onto the try-scoring pass in the first half but the lineout misfired, one or more of which was down to him. Rating: 6

Brodie Retallick: A wonderful performance in every aspect, tackling rucking, carrying, lineout and a presence at the breakdown. Rating: 8

Sam Whitelock: His usual high energy, athletic, mobile performance that tends to underpin any all Blacks’ success and a lineout steal to boot. Rating: 7

Jerome Kaino: He really enjoys his role of enforcer and this he discharged effectively in defence while adding some typically muscular carries. Rating: 6

Sam Cane: Brilliant performance from the openside for whom the Lions had no answer as he pilfered their ball several times and was the main reason his side emphatically won the breakdown. Rating: 8

Kieran Read: The fact that he had missed the last six weeks due to injury just frames the magnitude of a magnificent contribution. Rating: 9

Replacements: Aaron Cruden and Anton Lienert-Brown came on early and ensured that the All Blacks didn’t lose too much shape in attack. Scott Barrett will be disappointed with the last try while Wyatt Crocket, Charlie Faumuina and TJ Perenara brought energy. Rating: 7

Coach: Steve Hansen identified the key areas where he wanted to challenge the Lions; the scrum, the breakdown and in using the inside pass and his players discharged the plan beautifully. The Lions butchered some try scoring chances but New Zealand were worthy winners. Rating: 7

Lions squad set to have a greater spread than four years ago 22:00
Warren Gatland hopeful that Lions itinerary will be finalised this week 22:00
Blackmore back among the winners at Fairyhouse 22:00
Elite athletes still required to undergo 10-day mandatory quarantine 20:32
Klopp says Liverpool need ‘perfect performance’ to overcome Real deficit 20:00
Crossword Get access to over 6,000 interactive crosswords