Injury concerns for Munster ahead of Warriors trip 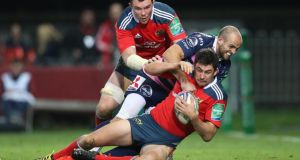 Munster have a number of injury concerns ahead of the resumption of RaboDirect Pro12 duties against Glasgow Warriors at Scotstoun on Friday.

Fullback Felix Jones has been ruled out of the game after he sprained his ankle in the 26-10 Heineken Cup win over Gloucester on Saturday.

Jones was replaced in the 58th minute by Denis Hurley, who was himself injured 10 minutes later, and will now undergo a scan on his knee to “identify possible medial ligament damage”.

Donnacha Ryan will also undergo a knee scan after he was withdrawn on 70 minutes. He will “meet with a specialist before his prognosis is confirmed”, while Niall Ronan (ankle) will be monitored throughout the week.

“Gerry Hurley will meet with the specialist tomorrow for an update on his finger injury”, according to the province, while Tommy O’Donnell (knee), Paddy Butler (thumb) and Simon Zebo (foot) all continue with their rehabilitation programme.

Lock Ian Nagle is also out of consideration for a few weeks despite progressing in his rehabilitation from a foot injury.

The good news is Luke O’Dea (wrist), who has not featured since March, but made his return for Shannon at the weekend, when playing 30 minutes against Dolphin.