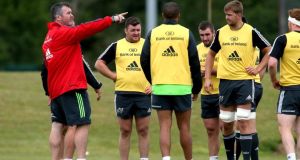 Already new coach Anthony Foley has been forced to plan without skipper Peter O’Mahony, Donnacha Ryan, Damien Varley, Gerhardt van den Heever and all of his international contingent for the opening weeks of the season. But the loss of Sherry and Earls is a massive blow to Munster.

Sherry had been working his way back from a cruciate ligament injury sustained last December, and decided to have corrective surgery on a shoulder problem at the same time. However, a follow up appointment with his shoulder surgeon uncovered issues with his shoulder graft and he was forced to have another operation last Friday to fix the problem.

Sherry started last season vying with Damien Varley for the starting hooker’s jersey, but Varley has also been ruled out of Munster’s opening Guinness Pro12 game against Edinburgh as he rests an ongoing foot problem.

Third choice hooker Duncan Casey, who impressed last season, looks set to miss Munster’s first pre-season game against Gloucester this Saturday as he ramps up his pre-season work, while young No 2 Niall Scannell will miss the next month because of a wrist injury.

With four of his leading hookers our of action, Foley has called up Kevin O’Byrne from UL Bohs and Gerry Slattery from Young Munster.

“It a huge blow for everyone, but personally for Mike, we’ll look after him, it’s important to us . He’s an integral part of our squad . . . .

“Kevin has been with us all pre-season because of the Damien Varley and Niall Scannell situation. When Mike’s issue raised its head a couple of weeks ago we brought in Gerry Slattery into our squad.

Foley, who look set to run his eye over more than 25 players in the weekend’s clash with Gloucester at Kingsholm. There was more bad news for Earls who picked up a knee injury training with Ireland last week, and he will also miss the start of the season.

1 The Offload: Springbok heavyweights heading for Pro14
2 Gerry Thornley: South African sides would be a welcome addition to Pro14
3 Ken Early: Handball ‘crisis’ a timely distraction from the grim bigger picture
4 Stuart Lancaster and Leinster ready to roll again at the RDS
5 Sporting Upsets: When Katie Taylor was stunned in Astana
Real news has value SUBSCRIBE