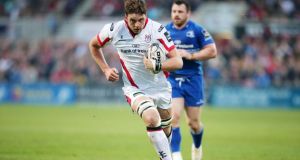 “Iain Henderson went off his feet but I think it would be harsh to say he launched himself at Ronan O’Mahony.” Photograph: Darren Kidd/Inpho

Iain Henderson paid a very high price on Saturday against Munster. I’m not saying Nigel Owens was wrong to send him off but the reality is that if every ruck in every game was refereed like that, we would be watching a completely different sport. Ulster must feel pretty aggrieved and I wouldn’t blame them – this isn’t the first time they’ve suffered because of the interpretation of an incident that didn’t go their way.

The Jarred Payne red card was very similar. Different sort of incident but the same sort of thinking. Player safety has taken over as the most important consideration and it’s pretty clear that referees don’t mind making an example of players from time to time if it stamps out a wider issue. It happened to Sam Warburton in the World Cup, it happened to Payne in the Heineken Cup and I feel sympathy for Henderson because it looks to me like that’s exactly what happened to him on Saturday.

The concussion issue has everybody a bit spooked now. Anything that even hints at reckless play is a no-no. The authorities have decided that it’s better to be over-careful and you can understand why. There’s so much TV exposure, there’s such a battle between the different sports to get people watching. It’s not a great advertisement when guys are getting knocked out and concussed through unsavoury play.

The game has changed. Attitudes have changed. The days of being able to do something wrong on a professional rugby field and get away with it are gone. I am 100 per cent certain that if we had a repeat of the incident between Tana Umaga, Keven Mealamu and Brian O’Driscoll now, both of the All Blacks would be banned in a heartbeat. It wouldn’t matter that it’s in the middle of a Lions series, it wouldn’t matter that there’d be huge pressure from the New Zealand public. They’d be done, gone and out of the rest of the series.

These days, all you have to do is lift a guy off his feet and not put him back down correctly and you’re almost certain to be banned for a month at least. That can be traced right back to what Umaga and Mealamu did. After that, spear tackling or tip tackling couldn’t be allowed to go unpunished so now anything that looks like a tip tackle is automatically on dangerous ground. Intention doesn’t really come into it.

Iain Henderson dove off his feet at a ruck and sent Ronan O’Mahony flying backwards. The law says a player must not charge into a ruck or maul. And it says that charging includes any contact made without use of the arms or without grasping a player. Now, that looks pretty simple in black and white. But is it really policed that way on every occasion?

I would safely say that there are dozens of times in every game when a player hits a ruck without complying with every last word of that law. Players go off their feet the whole time. They lead as much with their shoulder as they do with their arms. They try to make it look like they’re grasping just as often as they actually do grasp.

Rugby is won and lost at the breakdown. That’s the battleground, plain and simple. A team will not win a rugby match if they hit every ruck with their feet planted on the ground and their arms out wide ready to grasp the player they’re trying to clear out. Play a game that way and all you get is pundits like me shaking my head at half-time saying you’re getting totally dominated at the breakdown.

Everybody knows and accepts this. It’s like all the wrestling at corner kicks in soccer. Technically, it’s a penalty for the attacking team or a free for the defending team every time. But there is a general acceptance in the game that a certain amount of it is okay. Nobody says exactly how much though, which every once in a while leads to a crucial penalty being given away and a match won or lost on the back of it. Grey areas have consequences.

The grey area when it comes to ruck time is that it is an intrinsic part of the game to lay down a marker at the breakdown. It goes to the very heart of the battle for possession – if you come over onto the wrong side of the ball, you must be prepared to get hurt. This is a physical sport made up of physical battles for every little inch. As a young player, you are taught to bind onto the player you’re clearing out and to lift him out of that area. Or to try to anyway. But as you get older and bigger and your opponents get older and bigger, you find out very quickly that technique alone isn’t going to do the job. You need to add in aggression.

This is the fine line players have to walk. To dominate a ruck you have to be more aggressive than your opponent. That means going in with a lot of speed and a lot of force. But you have to judge it so that the speed doesn’t take you off your feet and that the force is applied with your arms in the right place. You push it as close to the line as you possibly can.

Henderson went off his feet but I think it would be harsh to say he launched himself at O’Mahony. There’s a difference between launching yourself and going in at speed. This is where video evidence can be unfair on a player because everything looks worse when it’s slowed down.

His big problem, to my eyes, was that he led with his forearm. If he’d got his right arm out and around O’Mahony, I don’t think Owens could have decided it was reckless play. Owens called it leading with the head but the problem was where his arm was. If his arm had been up, he could have shifted his head to one side or the other.

But because his arm was down and in front of him, he couldn’t grab O’Mahony and instead had to try to shift him with force. O’Mahony was quite exposed and there was a head-on-head collision. Add in the slow-mo replay of it and I can totally see how it ended up being a red card.

But like Payne and Warburton before him, I don’t think there would have been any big issue on either side if Owens had produced yellow. I go back to what I said about those two incidents – if you’re pulling out a red card, it seems to me that you’d want to be pretty sure there was intent in the act.

A player in Henderson’s position will hit countless rucks in every game. There’s no deep thought process involved. You go in, you clear out, you get to your feet. You are going in with the intention of dominating your opponent. But nobody would argue that he was going in to try to land a flying headbutt on O’Mahony.

So the offence really is carelessness. Again though, that is a vague term that gives the authorities scope to make an example of a player in the name of safety. In a sport where you put such a premium on physicality and intensity at this one specific area, it seems harsh on a player to pay the price of a red card if he gets one of those split-second judgments wrong.

But player safety is the be-all and end-all. So be it.