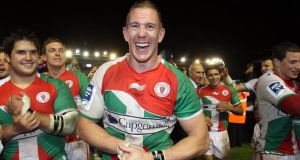 Imanol Harinordoquy: “It’s the reigning European champions, at their place too, so for us it would be a big achievement, or even a miracle, to win against them.”

They will come face to face at the RDS on Saturday, but in a different world Brian O’Driscoll and Imanol Harinordoquy could have been team-mates.

As his contract with Leinster neared an end in 2005, O’Driscoll famously paid a visit to Biarritz, at a time when the French club were a major force in both the Top 14 and in Europe.

Ahead of this weekend’s Challenge Cup semi-final, Harinordoquy said he was not too aware of the incident at the time.

“No, he didn’t come into the dressingroom so we didn’t see him,” the Biarritz captain laughed. “We hear about a lot of things that don’t happen. So it remained a rumour, even if we would have liked to have him in our squad.

“It’s true that it was a strong period for Biarritz Olympique but we didn’t know how to attract players like O’Driscoll, or we weren’t able to.”

Things have changed dramatically since then, with the iconic backrow conceding that the Basque club have struggled to compete with some well-bankrolled French rivals.

“It’s difficult because we don’t have the squad that teams like Leinster have. In France there are teams that are better structured than us and are more professional, like Clermont, Toulon, Toulouse and Montpellier. It’s difficult to compete with those teams over time but in one match we’re capable of beating everyone.”

After missing out on the playoffs, Biarritz saved their season last year by beating Toulon in the Challenge Cup final. Now they face a similar scenario. “It’s been a frustrating season because we’ve alternated between good and less good. In the end, we’re lacking the points needed to finish in the top six, even though I think it was within our reach.”

“We know as well that it will be more difficult than last year,” he continued. “It’s the reigning European champions, at their place too, so for us it would be a big achievement, or even a miracle, to win against them. But it’s a match of rugby and in rugby anything is possible.”

Harinordoquy only took up rugby at 15 after being forced to take almost a year out of all sport due to growing pains. Since then the 33-year-old has developed into one of the fiercest competitors in the game and he’s hoping Biarritz can raise their game to Leinster’s level.

“They have practically no weaknesses so we have to concentrate on ourselves, and our defence. We’ll have to be very tough in our attitude, notably at the breakdown, because that’s an area where they’re very efficient.

“It’s simply about keeping the ball and making the most of when we’re on top.”