Hanrahan kicks 10 from 10 for dominant Munster 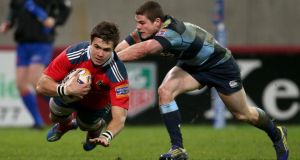 Two eras of Munster rugby were bookended on Saturday night as they hit a half-century of points for the first time in over five years in a league match. The last time they scored 50 was Tony McGahan’s first home game in September 2008.

No light was shed on the circumstances surrounding the surprise annoucement of coach Rob Penney’s rejection of a contact extension, with the Kiwi refusing all questions on the matter.

It is understood an unwillingness by Munster to support him by offering a contract extension of more than a season at a time when they are flying high, coupled with an apparent lack of autonomy in selecting his backroom team, are the primary reasons for Penney to decide to move on.

Munster led 19-13 at the interval with the impressive Dave Kilcoyne getting over for his second try in consecutive league games, while JJ Hanrahan converted all six tries and added four penalties.

Munster turned the screw after restart, forcing a series of scrums which had the Blues back-peddling and when rookie replacement prop Patrick Palmer was binned, they went to town.

A penalty try was followed by a touchdown from Simon Zebo – impressive at fullback – and the bonus point was secured while they had the extra man when South African recruit Gerhard van den Heever crowned his first Thomond Park start with a good try.

Andrew Conway and CJ Stander sealed the win with late tries with Hanrahan continuing to split the posts from all angles.