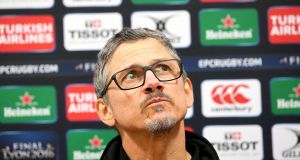 You have to believe that Italian hooker Leonardo Ghiraldini dismissed the second half of Ulster’s big win over Toulouse as an aberration, as the French club announced yesterday they had signed the hooker from Leicester on a three-year contract.

The Azzurri number two, who has 80 caps, will join the club at the end of the campaign from Welford Road.

The defeat means there is clarity for Toulouse, who need to win in order to stay in knockout phase contention, with Saracens dominating the pool and Ulster sandwiched between the third-placed French and first-placed English club. There is, though, just one point separating Ulster and Toulouse.

The question is what Toulouse team will turn up and which one is it that Ghiraldini believes he will be joining. He may also ask how such a side could fold so abjectly to Ulster. It seems too often to be the French teams that lapse into venal mood swings that throw up score lines that make the statisticians believe a decimal point has gone missing.

Irish flanker Chris Henry is not included in the match-day squad, as Kiss did not want to take a risk with his shoulder injury just yet.

Toulouse manager Fabien Pelous and head coach Ugo Mola have made nine changes to the side that flopped in Kingspan Stadium.

Alexis Palisson, Kunatani Kunabuli and Timoci Matanavou form a new back three for the four-time European champions. Florian Fritz replaces Toby Flood at inside centre while 32-year-old former All Black Luke McAlister is replaced by Jean-Marc Doussain at outhalf.

In the pack Imanol Harinordoquy replaces Louis Picamoles at number eight, with Gregory Lamboley taking over from Joe Tekori in the second row. Julien Marchand and Cyril Baille also join Census Johnston in the front row.

Evidently Toulouse have been unafraid to make harsh calls, although, with Fritz in the centre and Harinordoquy in the backrow, some of the changes are not too shabby.

The French side have lost just twice in 10 home matches against Irish opposition – Leinster in 2006 and Connacht in 2013 – while Ulster have never won there, although they came away with a 35-35 draw all of 15 years ago.

“Our objective is to finish the competition with our heads held high,” said scrumhalf Sebastein Bezy, who managed to hold on to his starting position for the game. “We have to make sure not to let Saracens or Ulster qualify easily. For our fans we must play right to the end.”

Which is something they didn’t do last week. The bookies have Toulouse as five-point favourites. No surprise. Can they fold two weeks in a row in front of the home crowd? Unlikely.