Toulon ask English clubs if they can join Premiership 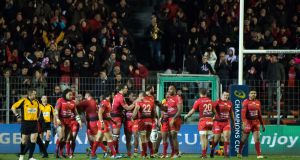 Toulon owner Mourad Boudjellal wants his club to play in the English league.

Toulon president Mourad Boudjellal has written to the English Premiership clubs about the possibility of his reigning European champions joining England’s domestic competition.

A Premiership Rugby spokesman confirmed to that a letter was received via email from the French club on Wednesday night.

“It is a bit early for us to make a formal response,” the spokesman said. “But we will be doing so in due course. It does show the appeal of Premiership rugby.”

Boudjellal has had an ongoing and often bitter battle with organisers of the Top 14 — France’s premier domestic competition — about matters such as the €10 million salary cap, and most recently, new rules that were introduced last summer regarding player bonus payments now being part of the cap if they amount to more than 10 per cent of a player’s salary.

England World Cup winner Jonny Wilkinson inspired them to a first European title in 2013, with that trophy being retained the following season and in 2015.

Victory over Bath at the Recreation Ground on Saturday should secure a Champions Cup quarter-final place and keep Toulon on course for an unprecedented fourth successive European crown.

Speaking about what will be widely viewed as an audacious and improbable move, Boudjellal said: “I wrote for a contact. If this is not possible the next season, maybe the one after that.

“For them (the English), besides a big first, it would be a huge added value. And I’m serious in my approach.”

All cross-border competitions require approval, which would mean involvement at some stage from the Rugby Football Union and French Rugby Federation if Boudjellal follows up his initial contact by pursuing a Premiership place.