Ruan Pienaar to make first start of the season 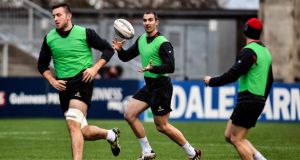 Ruan Pienaar will make his first start of the season for Ulster as they attempt to breathe some life into their ailing Champions Cup against the Scarlets tomorrow night.

Pienaar, who suffered a knee injury on international duty with South Africa in September, comes straight back into Neil Doak’s side for the match at Ravenhill (kick-off 7.45pm) while the Ulster coach is also able to recall Dan Tuohy.

Tuohy has not played since September as he recovered from a broken arm and returns alongside Franco van der Merwe in the second row.

Having lost both their opening games in the competition, Ulster require at least a bonus point win against the Welsh side and Doak has recalled Tommy Bowe and Robbie Diack to the side beaten by Munster last weekend.

The Scarlets, second in the pool after a home win over Leicester, have made a raft of changes to the side beaten in Connacht last time out with the likes of Liam Williams, Scott Williams, Samson Lee and Jake Ball returning from international duty.

“Ulster are a strong set piece side with a very good scrum and have one of the best defensive records in the domestic league,” coach Wayne Pivac said ahead of the game.

“They’ll be a hard nut to crack away from home, having said that we’re going there sitting in second place. We’ll be going there with a view of putting our best foot forward and trying to get a result.

“They need to win or it’ll be all over for them. There’ll be a big crowd and we’ll be up against it but it’ll certainly a good challenge. We need to get our performance back up to where we were against Toulon and Tigers in the opening two rounds.”