Rhys Ruddock set to be sidelined with arm injury 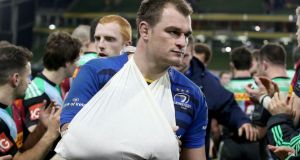 Capped at openside wing forward in the big November wins over South Africa and Australia, when Ulster’s Chris Henry required heart surgery, Ruddock was forced off during Leinster’s unconvincing 14-13 victory over Harlequins at the Aviva Stadium on Saturday night.

He returned to the bench in a sling. Initially capped at 19, this is the latest in a succession of injuries sustained by the son of former Leinster and Ireland under-20s coach Mike Ruddock.

Meanwhile, there are a number of incidents, arising from the 78th-minute brawl, that will be reviewed by citing commissioner Stefano Marrama from Italy.

“It’s a non-event really,” said Leinster coach Matt O’Connor. “We have to see what the citing commissioner thinks.”

Romain Poite and Television Match Official Eric Gonthier came to the conclusion that neither Danny Care nor Ian Madigan, their fight seemingly instigated by Care bouncing the ball off Mike McCarthy’s face, or Harlequins lock George Robson, who punched Dominic Ryan, deserved punishment. Charlie Matthews, however, and to their director of rugby Conor O’Shea’s disappointment, was sin-binned for coming into contact with Ryan’s eye area.

“It was a much ado about nothing scuffle. I’m very disappointed with the reaction of one of the players to what went on. It’s done.”

Ryan went down after being isolated and manhandled by Matthews and Robson. He received prolonged treatment and had notable bruising around his eye.

O’Shea wouldn’t confirm if it was Ryan’s action that disappointed him.

“I’m disappointed. I’ll keep it to myself.”

The losing bonus point means Harlequins remain top of Pool Two as they have superior points and try scoring records to Leinster. Both are on 13 points from four games, with Wasps a further point behind after their bonus-point hammering of Castres on Sunday.