With Glasgow Warriors beating Racing in Paris, Pool One has been flung wide open, but Munster remain in firm control 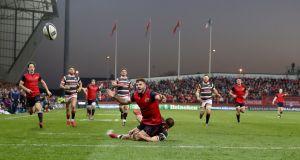 Munster are given a penalty try after a late tackle by Leicester Tigers’ George Worth on Jaco Taute at Thomond Park, Limerick. Photograph: Inpho

The reconstruction of Munster in the image of bygone eras is impossible. Even if the similarities are everywhere; CJ Stander being an amalgamation of all the bruising traits seen by 1990s Shannon.

Peter O’Mahony remains the alpha dog of collision zones, like a Leamy or Corkery, constantly tempting dishevelled Tigers to screw his neck from shoulders as the captain pilfered or slowed enemy ball.

“Peter O’Mahony will only get better,” said Rassie Erasmus. “Nobody goes out of rugby for over a year and hits their straps after six, seven games.”

And what of CJ the Lion? “Surely he must be a contender.”

Still, it should be noted, this under-strength Leicester side sullied the once feared lettered jersey in equal measure to Munster confirming that unquantifiable mystique has returned to Thomond Park.

Following 35 frustrating minutes, albeit buffeted by Tyler Bleyendaal’s boot punishing early and constant Leicester indiscretions for a 12-0 lead, Conor Murray conjured up the first try with a cool reverse flick for the smiling Simon Zebo.

Sinners were binned: Ed Slater was eventually followed by the arm less Manu Tuilagi before George Worth made it three yellow cards in a truly miserable collective 80 minute showing.

“Cheer up folks, it’s alright,” began Leicester director of rugby Richard Cockerill, adopting his jester persona post-match. “That performance is unacceptable. The one good thing is we get to bring them to Welford Road next week.”

Can you turn it around? “Yes. Last year when we came here there was very much a negative vibe around the place. For obvious, tragic reasons they seem to have found the Munster of old.”

Sprinkled with the new. Bleyendaal, who glides and strikes the oval leather like any cross-pollination of Andrew Mehrtens and Dan Carter should, did duff one penalty in the opening half but his line kicking was almost comparable to the Racing 92 defence coach.

Not quite there yet.

Ben Youngs did himself no favours in direct opposition to Murray but, really, the 67-times capped English nine was handicapped by his anonymous backrow.

There is simplicity to the Erasmus methodology. Bleyendaal and his back three aerially targeted the Leicester wingers as Darren Sweetnam or Earls leaped up to flap possession down to yield possession and territory which acted as a precursor to most scores.

Taute profited individually with his unofficial farewell hat-trick. The Springbok’s scheduled return to Cape Town in January could be postponed by David Nucifora with Erasmus arguing his immense value as an on field battering ram and off field mentor. The problem is Munster’s All Black centre Francis Saili returns from injury against Leinster on December 26th.

Taute’s first try, coming off Donnacha Ryan’s hard driving maul, forced a dazed Freddie Burns out of the contest after the South African bashed past him. Taute’s second touch down was due to the brilliantly unconventional Sweetnam straightening in the wide channel before a delicate inside offload.   Again, far too easy. 56 minutes played: 31-0.

“Look, I have seen the scoreboard,” said Cockerill. “We got our arses smacked.”

Brutish immaturity was Tuilagi’s response as he torpedoed into a ruck, lancing his shoulder off Jean Kleyn’s head, his third such act before Poite put him off. It took another 20 minutes before the bonus-point try arrived. Its origin being the defensive animosity created on Jacques Nienaber’s coaching watch. Textbook: when George McGuigan drove towards the Munster try line, Bleyendaal hit low, the increasingly impressive Rory Scannell propped him up as Stander tore ball clean off the former Ireland under-20s hooker.

The crowd exploded when Bleyendaal hopped up to punt a 20-metre touch finder. The next rip by O’Mahony, assisted by Stander, saw the Leicester forwards visibly slump. Some even took a knee.

Munster were motoring in the other direction, having muscled up with huge South Africans, Thomas du Toit and Kleyn, arriving alongside a ravenous Jack O’Donoghue.

After a clever chip by Sweetnam, Taute was denied the trick by Worth’s early tackle which prompted Poite to peel off a third yellow card and jog under the posts.

Maybe not the fairest decision but Munster’s fourth try did seem inevitable.

“That was a great performance in a great atmosphere,” Cockerill conceded. “When they come to Welford road next week we need to stick a stake in the ground. We need to meet them head on. I’ll be buggered if we are going to concede the Pool. That’s not what Leicester is about.”

With Glasgow Warriors beating Racing in Paris, Pool One has been flung wide open, but Munster remain in firm control.

Erasmus preached caution and humility afterwards but behind the changing-room door his message must be fascinating to hear, such is its impact on the field. “Sometimes we will lose games because sometimes teams are better than us.”

For seven straight games that team has been unavailable. “Leicester will be hurting,” said O’Mahony. “They will be mad to get us over there and get stuck into us.”

Easy motivation for Munster men of old and anew.