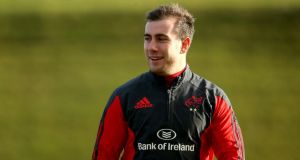 JJ Hanrahan: Munster are keen to ensure he remains with his native province. Photo: James Crombie/Inpho

The odds on Munster fending off Northampton’s very real interest in acquiring JJ Hanrahan have increased over the last 48 hours in tandem with what has been an improved offer from the province to keep the 22-year-old playmaker in their ranks.

The Munster academy product from Castleisland is in the second and final year of his first professional contract with his native province and Northampton had offered him a considerable increase with a contract worth in the region of €190,000 per season.

This was also a good deal more than any new deal Munster were initially inclined to make but the indications are the province have improved their offer significantly in a bid to retain the player.

“There are contract negotiations ongoing,” said Anthony Foley on Wednesday after Northampton’s approaches had been revealed in The Irish Times. He also revealed that Hanrahan’s comparative lack of game time was due in large part to the efforts spent in getting rid of an unspecified injury which he had been carrying for some time.

“It’s all part of it. You don’t want it out in the public that fellas are up for negotiations because with quality players like JJ teams come around and want him, so it’s important for Munster to keep our own players coming through.”

Presumably this is all the more so for a young indigenous product of their own system who was such a star of Ireland’s Under-20 team at the 2012 Junior World Cup that he was shortlisted for the IRB’s Young Player of the Year.

As well as improving their offer to something more in keeping with the player’s worth, if not to the same level as Northampton’s offer, Munster would also surely have impressed upon Hanrahan the benefits to his career of remaining with them.

In any event, a decision is likely to be made next week but from a position where Northampton thought they had their man, Munster are now favourites to retain him.

There are also indications Hanrahan may make his first European Champions Cup start in Sunday’s return fixture with Clermont Auvergne at inside centre in a new midfield alongside the fit-again and recalled Andrew Smith, the ex-Brumbies centre who was ruled out of last Saturday’s loss at Thomond Park with a shoulder injury. Andrew Conway will presumably be recalled for the unfortunate Gerhard van den Heever.

With Alan Cotter also sidelined, Munster will have to convert tight-head John Ryan into the starting number one with Argentinian hooker Eusebio Guinazu, who has played at loosehead prop for the Pumas, as back-up.