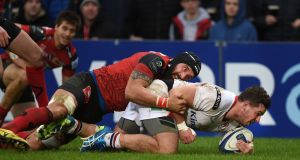 Ulster flanker Sean Reidy drives for the try line despite the attentions of Valentin Ursache of Oyonnax during the Champions Cup game at Kingspan Stadium in Belfast. Photograph: Charles McQuillan/Getty Images

An eight-try 56-3 thumping of Oyonnax put Ulster in as strong a position as they could have hoped for as they waited to learn whether it would be enough to take them into the European Champions Cup quarter-finals.

Ulster head coach Les Kiss praised his side’s efforts and trusted it would be enough to carry them through as a best runner-up.

“We knew the mission at the beginning of the week,” said Kiss.

A heavy home defeat to Saracens and the failure to bag a bonus-point win at Oyonnax clearly hurt Ulster’s campaign but Kiss emphasised his pride at how his squad had at least finished the pool stage.

“In previous games we didn’t nail a couple of points that we could have got which would have made it easier,” he said.

“In the context of this week we put pressure on ourselves to do well and (having done that) now we sit back and wait.”

Ulster scored tries through Rob Herring, Darren Cave, Rory Scholes, Sean Reidy, Craig Gilroy, Robbie Diack, Ian Humphreys and Jared Payne – and all were converted with Paddy Jackson kicking five and Humphreys three conversions – in what was a rout of the French side which saw the home team bag their bonus point by half-time.

The 56 points also beefed up the province’s points differential which could be relevant in what looks to be a tight finish for the three group runners-up in making up the quarter-final line-up.

“There was disappointment from last week (the heavy defeat at Saracens) and it hurt but to their credit, at the beginning of the week we just said ‘we’ll cleanse ourselves and make sure we build on what we have to do this week’,” said Kiss.

“The campaign wasn’t perfect, we knew that, but if anyone had a perfect campaign I’d say they’re the champions.

“But to stay in the hunt and keep fighting away is something we have to take as a strength.”

Still praising his side’s efforts, Kiss feels Ulster are moving in the right direction regardless of whether they make Europe’s knock-out stages this season.

“The growth in our game has been really strong,” said the coach. “I’m very proud of what the boys have delivered in the campaign albeit we’ve had a couple of misses along the way.

“It is what it is now and we’ll take a lot out of it. We’ve had a lot of injuries and secondrow Alan O’Connor has done a great job stepping in for Iain Henderson. With our injuries in the backline, Stuart McCloskey and Luke Marshall has done a superb job and our nine and 10 has been really strong.”

Even though Ulster racked up eight tries, they failed to score again after the hour mark, but Kiss refused to be too critical of that outcome.

“I would have liked a couple more (tries) for sure but I don’t want to be too greedy and we got eight tries and from different people,” Kiss said.

“The important thing was that we had both sides of our game switched on, to try and stretch the scoreline and get the tries which were converted and which was great because the extra points mattered and also the other thing was to not let them in.

“You’re going to have a team which has purple patches and they tried hard to their credit but we still held them out and we still kept a points difference which may influence the end result.”

Ulster had their first try after just two minutes which Kiss admitted was of vital importance to the home side’s cause.

“That (Herring’s try) was very important,” said the Ulster coach.

“I think we won the toss and we kicked off (with the wind) to them and invited them to find a solution and we scored early which was a nice part of our start.

“We grew in confidence from there and it took us a little while to get that next score but to get the bonus point at half-time was very important.”