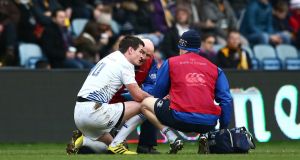 The IRFU will issue a statement today with an update on Johnny Sexton’s well-being after his latest bout of concussion forced him out of Leinster’s record 51-10 defeat to Wasps on Saturday.

Sexton failed his head injury assessment at the Ricoh Arena after a clash of heads with former Leinster teammate Brendan Macken and will have to undergo the normal return-to-play protocols.

There is a 15-day window before Ireland’s opening Six Nations game at home to Wales next Sunday week, but the nature of Sexton’s injury is a particular concern given his history with the issue, although this is his first reported case of concussion in almost a year.

Sexton was stood down for 12 weeks by French neurologist Dr Jean-François Cherman after suffering four concussions in 2014, which sidelined him from Ireland’s opening Six Nations game last season in Rome before his return a week later in Ireland’s 18-11 win over France.

The hamstring injury which forced Marty Moore from the Ricoh Arena after 62 minutes is also a cause for concern. The tight-head, ironically in the midst of a tug-of-war between Leinster and Wasps, was in line to understudy Mike Ross, who has been ruled out of Ireland’s opening two games due to a hamstring injury.

Leinster’s dismal defeat was also the first of a sequence of results over the weekend which put paid to Ulster’s hopes of qualifying for the quarter-finals of the Champions Cup.

The Les Kiss-coached side finished their campaign with a 56-3 win over Oyannax on Saturday to finish on 18 points and boost their points difference, but Wasps’ win, in tandem with Toulon beating Bath, meant both sides finished on 20 points and later that day Northampton’s bonus point win away to Scarlets put them on 19 points.

Ulster’s hopes were then extinguished by Stade Francais’s 36-21 bonus point win at home to Leicester, which also saw them eclipse Ulster as one of the three best runners-up on 19 points, in yesterday’s first round of matches.

A bizarre and dramatic finale to the day in Pool Two ended with Exeter knocking the Ospreys out courtesy of a 79th minute try by Thomas Waldron which sealed a 33-17 win.

The Chiefs were then handed qualification by dint of their three-way head-to-head record with the Ospreys and Bordeaux-Begles when Clermont lost 37-28 at home to Bordeaux; Morgan Parra tapping a penalty under the posts in the last minute when a bonus point would have seen them qualify as pool winners of a four-way tie on 16 points courtesy of their superior points difference.

The net result is a record five English sides and three from the Top 14 in an Anglo-French carve-up, with no Irish side in the last eight – for the first time since the 1997-98 season, 18 years ago.

Their reward is a quarter-final away to Bernard Jackman’s Grenoble, with the winners playing a semi-final away to Harlequins or London Irish.

The Ulster squad had spent the day together, with their families, at a social event to say farewell to the players who had been called into the Irish squad.

“We’re obviously disappointed but we saw the mountain that had to be climbed in terms of others doing a job for us,” said Kiss yesterday.

“In saying that, and in light of the performance I can only say how proud I am of the boys on the day and over the course of the campaign. To see ourselves right in the hunt until the finish, and then other teams had to respond to nail it, and they’ve done that, that put us out. But it puts us under a new focus over the next six weeks leading into the rest of the season for the Pro 12.

“Probably the two critical games for me were the two Saracens games. We would have liked to have won the one at home but we didn’t. But we should have got a point out of one of them, that’s for sure. I do think that we showed in both games that we could show it up to them. But we couldn’t stay with them . . . I think we played against the best team in Europe. The way they go about their business shows they can play for 80 minutes and that’s where we’ve got to grow our team and our mindset.”

“I was determined to get in the quarter-finals because you are playing rugby in April and May,” said Pat Lam. “It’s a one-off game and they have a big Irish contingent. We played them in pre season when they were well prepared, and we now go back there when we are better prepared.