Connacht run the hell out of everything, including Toulouse 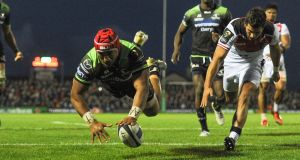 Connacht’s Bundee Aki touches down for the game-winning try in the Champions Cup match against Toulouse at The Sportsground in Galway. Photograph: Tommy Grealy/Inpho

Another black-magic night for Connacht rugby. On one of the great nights for the West of Ireland club, they executed a sublimely timed game-winning surge against, well, the standard bearers of European rugby, with Bundee Aki capping another electrifying performance with the decisive try.

Craig Ronaldson, back from injury after almost half a year out, made light work of the conversion from the corner under excruciating pressure. The kick looked good from the moment he struck it and the roar that greeted it probably travelled to the Spanish Arch.

Connacht won deservedly here and they did so in the new Connacht tradition of bold imagination and dazzling speed of hand and thought. Down 0-9 after 10; down 21-11 at the break: it didn’t matter. Pat Lam’s men just keep on coming and if they look like they are playing rugby for fun that’s because they are.

The usual injury crisis, fielding a rookie frontrow and the early season jitters, nothing seems to shake Connacht. It speaks volumes for their ambition that they were mildly annoyed that they allowed Toulouse to leave the west with a bonus point. But last season’s Pro 12 winning chutzpah has returned.

“I said after we won that trophy that that was just an outcome of the journey,” said a clearly proud Lam after he made his way through the teeming home crowd.

“We are a representation of the West of Ireland and people deal with adversity all the time. That is what gives me confidence and faith when everyone has gone quiet is that I know these guys will get them back in the game. We were just talking about how far we have come since we played them three years ago. This is just a proud day for us and our supporters.

“We are all about inspiring our community: that is the purpose of Connacht rugby and to see kids as young as five. It is wonderful. The biggest thing I am pleased about is the character of these guys.

“What sums them up the most is the last two minutes of the game when we went into our close out play. To execute that is massive. If we gave away a penalty they could have won the game. But we have that faith in ourselves.”

And that faith has spread into the terraces. In the space of a few years, the Sportsground has become a uniquely atmospheric well, sports ground. The Connacht attitude is infectious. For instance, with half an hour gone, Ultan Dillane came thundering along the touchline and dropped a pass right in front of the Connacht bench with green acres in front of him. The big Kerryman uttered what might have been an oath but he could be forgiven. Every time the home team had possession, the lock was playing as a de facto winger as Lam’s confused the big, expensive, ponderous Toulouse unit with their brand of expansive, throw-about rugby.

In the opening 10 minutes, Connacht had tested the truth of Toulouse’s forbidding scrmmaging power, quickly coughed up three penalties which Sebastien Bezy and – from halfway – Florian Fritz converted and thereafter resolved the smartest thing to do was to avoid the scrum at all possible costs.

The next 20 minutes were a treat for the vociferous home crowd as Connacht stuck to their abiding principle: run the hell out of everything. A sense of adventure and an absolute fearlessness of making mistakes underpinned a sustained period of play characterised by the thrilling infield bursts by Cian Kelleher and fullback Tiernan O’Halloran supported by the by-now customary slick handling of the Connacht pack.

The Toulouse XV were dragged from touchline to touchline with declining enthusiasm. Finlay Bealham was held up yards short of the Toulouse line in the 18th minute but a stolen lineout deep in their own 22 set Aki and Craig Ronaldson up for a sensational series of passes before Niyi Adeolokun finished the move in the corner.

There was something about the score which illuminated just how far Connacht has travelled. Toulouse, four times champions of this competition, are the grandees of the European game but they seemed lost and demoralised by the quicksilver brand of rugby they were facing. The attacking onslaught continued and the French coughed up a series of penalties for which they will be roasted in next week’s video analysis: not releasing in the tackle; not rolling away over the ruck; offside. Through Jack Carty’s boot, Connacht led 11-8 on the half hour mark and the carnival was in full swing.

And yet: at the break, the visitors rumbled off with a 21-11 lead. Twice Toulouse made rare visits into Connacht’s 22 count, with Yann David finishing an old-fashioned drive towards the corner flag. But two missed tackles facilitated Toulouse’s slickest phase of the half, with Yoann Huget, Bezy, Carl Axtens and Kakovin Vasil moving the ball through a ragged defensive line by the home team before outhalf Jean Marc Doussain touched down unopposed beneath he Connacht posts.

It was a lead they scarcely deserved but part of the new Connacht philosophy seems to allow for these upsets. When Matt Healy, his right hand heavily plastered, did his obligatory turn with the emcee at half-time, he confidently predicted “Those big guys aren’t going to last the next 40,” and forecast that Connacht could run in three of four more tries.

It isn’t that long ago when such a public assertion would have seemed delusional. But right enough, both Census Johnston and Christopher Tolofua vacated the frontrow just after half-time and Adeolokun was a fly-kick away from a certain try three minutes in. Both Bezy and Carty missed gimme penalties with half an hour remaining but for all the promise the home team showed, they still trailed by 10 points and time was beginning to favour the French. They reminded Connacht of the futility of scrimmaging by obliterating their set piece at the halfway line and taking one against the head and in a loose period of play, Connacht needed something or someone to spark.

Cue O’Halloran, invading Toulouse territory with a scintillating break . Connacht threw the ball about in the face of intense front-up tackling from Toulouse and John Muldoon had to scramble to retrieve a spilled ball before the home team moved it wide again, with Carty playing O’Halloran in for a 58th minute try.

The home momentum was irrepressible now: see Maxime Medard, no less, hoof a clearance out on the full, Aki halt a Toulouse break with a penalty-winning tackle and the Connacht bench on their feet. It was all green noise and Toulouse were addled, penned in, tackling desperately as Connacht attacks came in fast-slow waves: Bealham making yards, Kieran Marmion carrying for a few and then the ball recycled until Aki saw a clear line and bolted through untouched in the 67th minute. Ronaldson landed a sublime conversion from the left touchline and with theatrical timing, Connacht had a 23-21 lead with 11 minutes left to play. The usual high-wire stuff, then. For good measure, Connacht even held their own scrum on halfway, with Carty sending a clever kick scuttling deep into the Toulouse 22.

“The boys gutsed in out and held it,” Lam said of that crucial scrum.

“The boys tinker. They know what the problem is and they saw clips at half-time and they went to work.”

The French attacked with newfound frenzy in the last six minutes but a turnover in the Connacht 22 gave the home team to play heart-stopping keep ball on front of their own posts until the clock struck 80 minutes. Carty belted the ball into the night and the greyhound track fairly erupted. The announcer asked the crowd to refrain from entering the pitch.