Dubliner can fill two of the biggest boots in Munster rugby 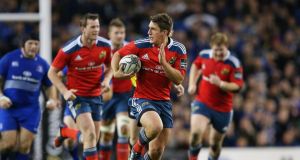 From the moment Ian Keatley stepped through the door of the Munster dressingroom for the first time in 2011, he has endured the forensic scrutiny of team-mates, management, coaches and supporters.

The Dubliner came via Connacht and would eventually be asked to step into boots of Munster legend Ronan O’Gara, to whom the Brave and the Faithful turned when the impossible needed doing.

Not everyone is charitable, open-minded or patient. Not everyone examines the bigger picture. Foreign and non-local players simply have more to prove. Supporters are a little more judgemental unless you arrive with a stellar CV. The outsider can become an easy scapegoat. When you’re “one of their own” as the saying goes – and that applies to any province – you get a smoother ride.

Rog casts a long shadow. Escaping it is difficult but Keatley stepped into the sunlight at the AJ Bell Stadium in Salford on Saturday. Keatley is invariably compared to his predecessor. That’s some heavy duty baggage but it goes with the territory and is just one of many mental challenges to be negotiated.

When he went to Munster he would have hoped to kick on and really push himself forward towards a place in the Irish squad. That is not to diminish in any way what he has done for Munster, but he must have been delighted to have been named in Joe Schmidt’s squad for the autumn internationals.

Two Ireland caps on a summer tour to North America in 2009 would not be the sort of return he wants against his name when he eventually retires. His ambition must be to become a more permanent fixture in Ireland squads.

Keatley’s time at Munster has coincided with a time of transition in players and latterly management. I would have been an advocate, based on my experiences of when I played, in bringing in one or two young players to play with the full team. The transition is easier. They get the benefit and inspiration of playing with a host of internationals in a strong team, and it’s easier to flourish in that environment.

Keatley generally found himself thrown in with a load of other new guys, so the understanding that is normally present with senior players can’t be guaranteed when you’re making wholesale changes.

It would have been better for him if he had got some more matches with the full side. That didn’t happen. It made his initiation into the culture and the team a bit more difficult.

Keatley is a confidence player. I was really pleased for him on Saturday. He’s had a few disappointments and been the recipient of some criticism during his time with Munster. It takes character and resilience to ride that out. Saturday could be the making of him. I’m sure he believes in his own ability but it can be difficult when others question it.

It’s about high hopes and high expectations. When you don’t meet those in performance terms it’s time to put on the flak jacket. It has been a challenging couple of years for everyone at the province.

The role of outhalf is fundamental to the success in any team. There are other positions like flanker, to focus on my old one briefly, where you can get away with so much more but when you wear the number 10 jersey, you are invariably the team’s decisionmaker in chief, the person who dictates the tempo of the game, what patterns to use, when to kick and when to run.

In building terms, if you view the coach as an architect, then the outhalf is the site foreman, directing the workforce. I wouldn’t have made much of an outhalf: the stress of thinking that much would have brought on too many migraines.

Keatley’s arrival in Munster in 2011, initially behind Rog, coincided with a lull in terms of silverware. It was something of a double-edged sword if you examine the moment he joined. In 2007 he won a Grand Slam with the Ireland Under-20 team and if he had gone to straight to Munster at that point, there is a fair chance he would have spent an inordinate amount of time on the bench.

Instead he went to Connacht where he picked up valuable experience and was allowed to develop in a challenging environment both in terms of the Pro12 and in European competition. So while youthful pedigree is attractive, there’s no substitute for the experience of playing, which hones and shapes individuals.

When he won that underage Grand Slam he would have been touted as a future Ireland outhalf and even though he’s won a couple of caps and now been included in the squad again, he will want and expect more.

Keatley is a player with a great work ethic and a real passion to win. When I talk to his team-mates they are the qualities, apart from his talent, that dominate conversations. The most important thing you have to do is to win over your team-mates. That’s what I have seen with Keatley over the last couple of years, someone who is extremely popular. Another thing I hear all the time is how talented a footballer he is.

The major question mark has been his game management, his decision-making and playing the ball in the right areas. You don’t learn it overnight and in fairness there are so many variables. He is hugely reliant on being provided with a platform by his team-mates.

There are probably only a couple of outhalves in world rugby whose game management ability you wouldn’t question: Dan Carter and Johnny Sexton.

Confidence is an integral part of development. I remember going to the World Cup in 2003 and being happy that I belonged in the Ireland team. I made my debut in 1999 and was in and out of the side. When I was selected for the Argentina game, I said to myself: “I’m ready for this now. Everyone’s fit, everyone’s available and I’m being selected for the team. It’s where I belong.”

I suspect Keatley has been racked by doubts, as I was, during his career. I hope that after Saturday he’s able to put those behind him and push ahead.

If you look at the Irish outhalves last weekend, he put in the best performance. He deserves the opportunity to be competing as back-up in the national squad.

He knows that he has a talented outhalf behind him in JJ Hanrahan and that pressure is always going to be there. That’s the nature of sport: you’re only as good as your last game and there is always an alternative.

I have been guilty of questioning his temperament and game management in the past and I won’t stop analysing his performance, but I want to give him credit for the way he played on Saturday. I’ve always believed he’s had the ability and the Sale match reinforces that assertion.

The courage he showed in turning down the first chance for a drop goal to wait for a better one and then nail it demonstrates the progress he has made, as does that wonderful touchline conversion. He has more than earned his shot at the next level.