While it was a close game, experience and grit eventually paid off for the Leesiders 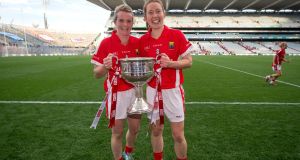 They were the hunted rather than the hunter this time but you don’t need to have seen a lot of the Cork women’s football teams to know they can do it any way you want.

Their 10th All-Ireland in 11 years came with them gasping for air at the end, defending their goal in harried desperation, like a side trying to close out their first ever win. When the hooter went, they were 0-12 to 0-10 ahead. Champions yet again, though they made hard work of it.

It wasn’t spectacular. It wasn’t inevitable. It was scrapped for and scraped out, a patchy game of nerves and mistakes that was entirely in keeping with what has been a September of grim finals in Croke Park. The LGFA got 31,083 through the gates, the biggest crowd for a women’s sports event anywhere in Europe this year. Just because they didn’t see a great game doesn’t mean they didn’t see greatness.

Dublin manager Gregory McGonigle has lost four out of the last five finals to Cork (including 2011 and 2013 with Monaghan). He has seen them chase down big leads, seen them shut down games where they’ve had plenty in hand. He must, you would think, be sick of the sight of them.

After a first-half that ended level on 0-5 apiece, Cork kicked for home with three points on the bounce from Valerie Mulcahy. But though it looked for all the world like they would surf their way to shore from there, the Dublin current kept threatening to drag them under.

Points from Sarah McCaffrey and Carla Rowe brought the margin back to just a point with five minutes to go before Mulcahy closed it out.

About half an hour after the final whistle, as the pitch emptied and the intercounty season had its last death rattle, the photographers lined up one final shot. The originals from 2004, all in a row: Corkery, Buckley, Mulcahy, Bríd Stack, Geraldine O’Flynn, and Deirdre O’Reilly, with Ryan and selector Frankie Honohan plonked in the middle.

When one of the snappers asked for a picture with just Ryan and the players, Honohan went to step away. He is barely known outside the group but in it he’s everything from tactician to confidant to provider of soup. There was a short embarrassed pause before the players rushed to tell the photographer where to go. No Frankie, no photo.