Should become first Irish Lions scrumhalf since 1980 on Saturday 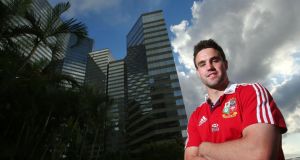 Conor Murray: “Warren said when we got in that everyone in the squad has the potential to start, so you’ve got to take confidence from that and just try your best.” Photograph: Dan Sheridan/Inpho

Logistically it makes some sense for the Lions to stop off in Hong Kong en route to Australia, reducing the travel times and perhaps the jet lag. But in terms of preparation and acclimatisation you’d have to wonder if this appetiser before the nine games in Australia will be a hindrance more than a help.

As anticipated, the 30 degree-plus temperatures and humidity of up 90 per cent have made training highly draining since the squad’s arrival on Monday, even if last week’s torrential downpours during Hong Kong’s rainy season have thus far relented.

Such conditions are not entirely unique for British and Irish players, but they may as well be. “I played in Japan four years ago for Ireland in the Under-20s World Cup and we played Uruguay and it was 36 degrees with this kind of humidity,” recalled Conor Murray yesterday. “It was hellish really and I was kicking that game and didn’t think I had the energy for a kick in front of the posts. So it was an experience but we didn’t get the chance to train in it too much.

“So it was good to get out there and get used to it and hopefully we’ll be acclimatised to it by match day. Fingers crossed. You’re obviously going to need a lot more water than we’d be used to at home but all those areas will be covered by the S and C (strength and conditioning) staff and we’ll just get on with our game,” added Murray, expressing the hope that there would be more water breaks.

Dividing the squad
Because of this fixture, with 14 players involved with their clubs or provinces up until last weekend, Warren Gatland and co have had to continue dividing the squad in two this week. But as one of the 23 players who were not involved in domestic deciders up until last weekend, and as one of only two active scrumhalves in the Vale of Glamorgan and Carton House training camps, Murray is sure to have some part in Saturday’s game, albeit most likely off the bench given a desire to play Phillips and as many of the probable frontliners as possible from the off.

Hence, he will become the first Irish scrumhalf to play for the Lions since John Robbie in the fourth Test in South Africa in 1980.

“When it (the squad) was announced it was a bit surreal and then when you come into camp it becomes very real and you begin training with these players that you’re so used to playing against,” said Murray.

“Being in here it’s really hit home and you don’t forget about how big it is but you’re competitive instincts take over and you just want to do as well as you can and try and make the most of your opportunity and get onto that team. That’s why we’re all here.

“That’s what Warren said when we got in, that everyone in the squad has the potential to start, so you’ve got to take confidence from that and just try your best. It’s just waiting for an opportunity now.

“Picking up little traits from players, I think that’s what the first two weeks have been about,” added Murray, whose talkative nature betrayed his excitement, “getting to know each other and it’s a new gameplan for all of us and new calls and getting those into our heads.”

Murray is aware of the three-way tussle at nine without being too caught up in it, and having roomed with Phillips last week, who quipped that he might break Murray’s leg, this week he is rooming with late addition Rory Best.

‘Getting on well
“I may be able to go to sleep with Rory in the room. I had to keep one eye open with Mike Phillips in case he attacked me. But there’s not much different, everyone’s getting on really well and it doesn’t matter who you room with.”

Murray admitted to paying special attention whenever Rob Howley made observations about his game given Howley’s scrumhalf expertise.

To general amusement, Howley mistook a question about the fans at training to mean supporters, rather than actual fans to help players cool down.

Howley said there were “no plans” to seek IRB approval for extra water breaks, rather masochistically maintaining: “The more stress they play under on Saturday the better we’ll be prepared for Australia.”

And as for this being a money-making jaunt, the Lions assistant coach retorted: “This is an important game of rugby. It’s important for many reasons, first and foremost, it’s putting a marker down for the British and Irish Lions in 2013 and what comes after.

“ And you will see by the intensity and the physicality that it’s an important game.”

1 David Clifford sends everyone back to their corners unbeaten
2 Six Nations: A 21st-century tournament that saw Irish rugby come of age
3 Six Nations: Ireland are contenders but England still the team to beat
4 James Durcan steals a draw for Mayo in Ballybofey
5 In Donegal Michael Murphy is seen, simply, as a godsend
Real news has value SUBSCRIBE