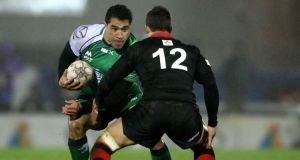 One of the abiding memories from the Sportsground last week was the performance of 25-year-old Connacht wing Matt Healy. He was quite simply exceptional, not alone in scoring a brace of tries, but in creating pandemonium in the Exeter Chiefs defence.

Virtually every time he touched the ball he managed to wriggle free and had he chosen a longer stud or the surface been less yielding he might have managed a hat-trick of touchdowns. The former Gonzaga College schoolboy who caught the eye of Eric Elwood while playing for Lansdowne and was recruited by Connacht is a former Ireland Under-20 international with nine caps.

“I thought he [Healy] was superb last week,” said Connacht coach Pat Lam. “The conditions suited Matt’s game a lot better. I think the big error from Matt over his previous games was that, while he was dangerous, he lost a lot of ball in contact and he’s the first to admit that.

“But he nailed that down. He spent a lot of time with Dave Ellis focusing on ball control in contact. So when you add that to a bit of x-factor in what he does, it resulted in a tremendous performance from Matt. He can be well pleased with himself.”

Quite how many opportunities he’ll get in France this evening in Connacht’s must-win European Challenge Cup game against La Rochelle is a moot point given the injury situation. Craig Ronaldson, injured in the warm-up last weekend, is missing, as is the midfield combination of Dave McSharry (concussion) and Irish international Robbie Henshaw (ankle).

has opted to move Danie Poolman – his team’s top try scorer in the tournament – from wing to outside centre and promote Conor Finn as the South Africa’s midfield partner. Jack Carty, who started last week’s defeat, retains the number 10 jersey.

Daragh Leader is named on the right wing, while Mils Muliaina takes over the captaincy in the absence of flanker John Muldoon, who is on the bench, while Ronan Loughney and Nathan White will form the new pillars of the frontrow.

Victory should be good enough to ensure Connacht progress but they’ll face a tough away quarter-final, possibly against Gloucester.

They hammered La Rochelle in Galway and the French side have lost their last three matches in the competition, albeit that two were away from home. They currently sit at the foot of the French Top 14 Championship.