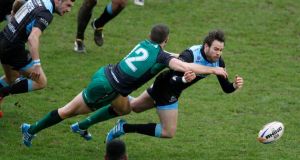 Connacht came desperately close to achieving what would have been their first ever win at Scotstoun but in the end failure to take their chances in front of the posts in the first half proved costly on Sunday.

Ronaldson, after missing an early kick at goal, opened the scoring with a seventh minute penalty but Glasgow, playing into the stiff westerly breeze, gradually worked their way back into the Connacht half with stabbing thrusts .

From a scrum, Henry Pyrgos dummied his way into open space before chipping the defence with a diagonal kick that allowed the fast follow-up of Bennett to produce a try.

Two unsuccessful attempts at goal by Ronaldson resulted in a zero points dividend for the visitors’ pressure. They opted for a scrum after another penalty award but their attempts to bulldoze over the Glasgow line were thrwarted by rock solid defence and an eventual turnover.

Just before half time Glasgow were penalised at a scrum and, this time, from in front of the posts, Ronaldson made no mistake with his kick to give Connacht a 6-5 interval advantage.

Turning round with the wind advantage, Warriors quickly regained the lead with a penalty goal by Jackson after a trenchant break by lock Leone Nakawara, but the outhalf was then wide with a drop goal attempt and a further two penalty kicks.

In the final minute, Glasgow had a chance to stretch their lead with a 60 metre attempt by Bennett. It was a superb effort but ended with the ball rebounding off the cross bar for the final action of a tight game and Connacht left with a losing bonus point but remained rock bottom behind Zebre.