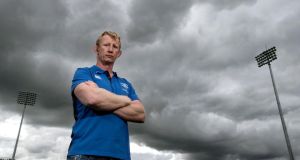 Leinster forwards coach Leo Cullen. “I would have watched a lot of coaches pretty closely over the last number of years.” Photograph: Dan Sheridan/Inpho

Some players like to walk away from the game completely on retirement, and stay gone. Others are similarly inclined, if of a mind to return one day. Others still prefer a middle ground of perhaps the odd coaching session or joining the increasingly popular media punditry, whereas some like to remain actively involved.

Akin to Anthony Foley in Munster, Leo Cullen was always more likely to be one of those who made the immediate transition from player to coach.

Amongst all the positives of crossing the threshold from playing to coaching, one of the most enjoyable, Leo Cullen freely admits, was avoiding the rigours of yet another pre-season.

“It’s definitely been less physically demanding,” he admits with a contented smile. “Not putting my body through that has been enjoyable.”

That said, he reckons avoiding the six-month slog through the depths of winter will be even better.

“Definitely I’d say the players do look at me differently. But I try to be a pretty similar person. I suppose the biggest change is that I go in the front door and I head straight upstairs and open up my computer, and start watching rugby games for the day, as opposed to going into the dressing room and throwing your gear bag down, heading to the gym, or the physio room – whatever the case may be,” he says dryly, in self-deprecating reference to his latter year or two.

Admittedly these are fledgling days, but Cullen appears remarkably relaxed and sanguine about whether he will be any good at this gig, or whether it really is for him. He has talked to a few coaches, but is happy to draw on his personal experiences of working with Michael Cheika, Joe Schmidt or Matt O’Connor, and the various assistants who have worked with them.

“I would have watched a lot of coaches pretty closely over the last number of years. You’re always trying to pick up bits and pieces here and there. Time will tell if I’m any use at this job or not, or whether I’ll enjoy it or not, when it comes to the games.”

“So it’s a little bit of stepping into the unknown but I’ve been pretty fortunate in that I’ve sat in the coaches’ box with Leinster’s last three coaches at various stages. I’ve been lucky enough that I’ve had a decent enough look at things without there being necessarily that much attention on me. But as I said, only time will tell,” concluded Cullen with a laugh.

He doesn’t see himself emulating Cheika’s Mr Angry. “I’m always cool and calm. Playing the guts of 15 years I don’t think I’ve been cited yet! I think my discipline has been exemplary, contrary to popular opinion.”

Captain of virtually every side he played with since his earliest underage days, with all the team talks that thus ensued, addressing the players henceforth will, he maintains, be different.

“It’s all about, for me, trying to deliver relevant messages to the players, whether that’s before the game, or during the game, when you’re only going to be able to target two or three players with messages, and then at half-time.

Then again, you wonder if it will be that different, and besides Cullen will be able to focus almost entirely on forward play. In all the years of captaincy, Cullen rarely lost his composure, while his utterances were always salient and relevant, traits that will surely stand to him as a coach.

Cullen’s promotion in place of Jonno Gibbes also indicates how Matt O’Connor will put more of his own stamp on Leinster this season, as does O’Connor’s choice of Marco Caputo as scrum coach in place of Greg Feek.

For Caputo it was a “no-brainer” to join Leinster and to renew acquaintances with O’Connor.

“Matt and I go back a long way. We played all our junior rugby together, right from the age of 10 up to senior rugby, so we have got a long association. This is the first time we have actually worked together.

“It should be good. We have very similar philosophies on the game and how it should be played with particular reference to the set piece so, yeah, we are very like-minded in that respect.”

The Italian-born, five-times capped, former Wallabies hooker says he has been as much influenced by his time working with French coach Laurent Travers as in Australia and the Brumbies’ set-up, and he hopes to leave his mark.