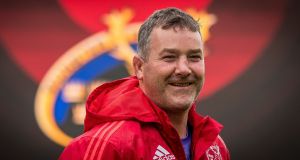 Foley (42) died on Saturday night at the team hotel in Paris.

Books of condolence were opened in the seven local authorities in Munster on Monday as a mark of respect.

The Irish flag is being flown at half mast outside the local authority offices.

Shannon Rugby Club also opened book of condolence in memory of their former player in Limerick.

“Anthony Foley excelled from a young age and made a huge contribution to the successes of Munster and Ireland, in both his playing and coaching careers,” he said.

“He was regarded with great respect and deep affection not just among the Munster rugby fans but by all those interested in Irish sports and those with whom they interacted abroad.

“While news of his death will be received with shock by all those in the rugby and sports world, it is of course first and foremost a great tragedy for his family and close friends.”

Taoiseach Enda Kenny said he was shocked by the death of Foley. “It is tragic to lose such a fantastic man at such a young age,” he said. “My thoughts are with his family and his club mates at this awful time.”

A veteran of Irish and Munster rugby, Foley played for Ireland 62 times, captaining his country on three occasions.

He also led Munster to their first European Cup victory in 2006. In all, he made 86 appearances in European competition for his province before taking over as head coach in 2014.

The Irish Embassy confirmed that it is providing consular assistance to Foley’s family.

If the cause of death is not immediately clear, French judiciary police may request a postmortem, which takes from two to seven days, after which the remains are released to the family for burial.

After the death was announced, Munster supporters assembled in front of the stadium to pay homage to the former player and coach, with applause and cheers.

1 Avoid the treadmill at all costs – marathon training in the 2km radius
2 Son Heung-min to carry out mandatory national service in South Korea
3 Reality Bites – Tales from the new normal: Shane O’Donnell
4 Sonia O’Sullivan: Taming The Tan gave us one last roll of the dice before shutdown
5 Rich Premier League clubs way off the mark in cutting staff pay
Real news has value SUBSCRIBE