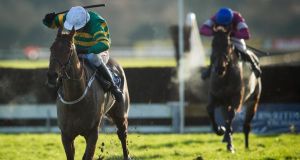 Not seen since his course and distance victory six weeks earlier, the Sandra Hughes-trained eight-year-old took command at the final fence in the hands of Barry Geraghty to land the €60,000 first prize for owner JP McManus.

Baily Green made the running with Draycott Place close up until the third-last, where the winner’s stablemate Guitar Pete made his bid for glory.

However, he was soon challenged by Nearly Nama’d (4-1), who travelled strongly going to the last.

Asserting on the run-in, Nearly Nama’d went on to score by four and a half lengths from Mozoltov, who stayed on to overtake Guitar Pete by a length for the second spot.

Hughes said: “That was great. The horse is improving. The trip was right, he’s a great jumper and he loves that ground.

“He’s a lot stronger than last year and Barry said he noticed a big difference in him from the last time he rode him.

“He needs that soft ground. He wasn’t handling the ground in the summer so we let him off.”

Hughes was just as pleased with Guitar Pete, especially on ground far from suitable for him.

“Guitar Pete ran fantastically and I’m delighted with him. There is room for improvement with him,” she said.

“He needs a bit better ground, that was very testing for him. I wouldn’t discount going to Cheltenham for something with him, but I’d like to win somewhere before that.”