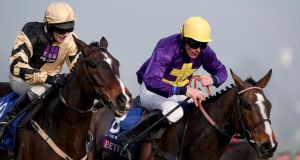 Lord Windermere, ridden by Davy Russell, beats On his Own, ridden by David Casey, to win the Cheltenham Gold Cup. Photograph: Dan Sheridan/Inpho

Cheltenham Gold Cup runner-up On His Own remains favourite in some betting lists for the Aintree Grand National but Willie Mullins indicated yesterday that the horse will instead aim for some Gold Cup consolation at Punchestown on the last day of April.

The champion trainer and On His Own’s owner Graham Wylie have decided not to appeal against the decision of the Cheltenham stewards in favour of Lord Windermere.

Many felt the decision was controversial, especially since On His Own was closing down Lord Windermere in the final few strides after being carried off a straight line by Davy Russell’s mount.

However, Wylie has dismissed an appeal bid and said: “That wouldn’t be a very sporting thing to do . . . I’m happy with second.”

Stewards on the day concluded that Lord Windermere had caused interference, that Russell should be given a one-day ban for careless riding and yet also decided the course of events were insufficiently persuasive to prevent them giving the winner the benefit of the doubt despite the tiny margin of defeat.

“We just felt as we didn’t win it on the day there was no point in trying to win on a different day . . . It was time to put a line under the matter and move on,” said Mullins

The handler finished the festival as leading trainer with four winners and said his Cheltenham team had returned home largely unscathed but the Aintree Grand National in just 19 days is unlikely to be on On His Own’s agenda. The Bibby Financial Gold Cup at Punchestown at the end of next month is a more likely target.

“He had a very hard race in the Gold Cup and I think Punchestown is the place to go with him. And the owner could have another string to his bow in that race with Boston Bob after his performance on Thursday,” said Mullins.

Boston Bob had his first start over fences in 11 months in the Ryanair Chase when finishing a nine-length sixth to Dynaste.

Lord Windermere’s trainer Jim Culloty has not ruled out the prospect of a rematch with On His Own at Punchestown but conceded: “My gut instinct is to leave him off and get him ready for Cheltenham next year. But . . . we’ll discuss it with the owner and he’ll probably get a few entries at Punchestown and such like.”

Mullins also said Hurricane Fly will attempt a remarkable five-in-a-row in the Champion Hurdle at Punchestown following his Cheltenham defeat.

The Ted Walsh-trained star, third to Neptune Collonges in the 2012 national, but out of the money when favourite for last year’s Aintree spectacular, is a general 33 to 1 shot for Liverpool. He returned to action in a hunters chase at Fairyhouse recently, finding only Warne too good.

11-year-old should strip sharper for that and could edge a trio of Gigginstown horses headed by Bog Warrior.

Today’s hunters chase at Down Royal should suit James who can successfully concede weight to Davy From Milan at the trip while at Wexford’s holiday fixture, the Charles O’Brien-trained Shutter Island can get the better of Ashjar in the juvenile hurdle based on his last effort when chasing home Kitten Rock at Navan.