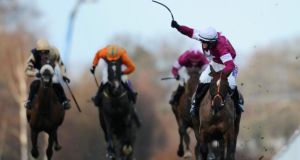 Brian O’Connell celebrates after his win on Last Instalment in the Hennessy Gold Cup at Leopardstown on Sunday.

Last Instalment put in a massively-improved career-best performance to complete a fairytale comeback from injury at Leopardstown on Sunday but will have to improve dramatically again if he is to trouble the top cross-channel horses in the Cheltenham Gold Cup.

The Philip Fenton-trained star earned a new official rating of 169 when blitzing his Hennessy Gold Cup opposition at the weekend. That’s a 15lb hike from the handicapper, reflective of an impressive display that has seen bookmakers cut Last Instalment to as low as 6/1 third favourite for steeplechasing’s blue riband in just over four weeks’ time.

However, that new mark still has the Gigginstown-owned nine-year-old lagging behind the top three British-based horses, with Cue Card on 174, the King George hero Silviniaco Conti on 177 and the reigning Gold Cup champion Bobs Worth a further 3lb higher still.

For a horse that spent almost two years on the sidelines with two separate bouts of leg trouble, tackling such quality opposition represents another step-up, but trainer Philip Fenton is confident of more improvement to come and a vital first battle in the Gold Cup war was won yesterday morning when Last Instalment emerged sound from his Hennessy heroics.

‘Absolutely fine’
“He’s absolutely fine,” reported a relieved Fenton. “It was a fantastic performance. We weren’t expecting that. Cheltenham, if the ground is okay, is the plan. The Gold Cup looks the obvious one, but we’re not going to rule out the Ryanair either.”

However, Paddy Power are offering 20/1 about Last Instalment for the Ryanair Chase, reflective of a general belief that the horse will be aimed at the big one in what will be his first trip outside Ireland.

Bob Worth continues to top the Gold Cup market as a general 9/4 favourite, with Silviniaco Conti next best on 7/2. Bobs Worth is aiming to become the first since Best Mate almost a decade ago to win back-to-back Gold Cups. The last Irish-trained winner of the Gold Cup was War Of Attrition, also in the Gigginstown colours, who scored in 2006.

Fenton’s top novice hurdler, The Tullow Tank, is also set to cross the Irish Sea for the first time next month, most likely for the Neptune, after his second to Vautour in Sunday’s Deloitte, a performance his Co Tipperary-based trainer doesn’t believe showed the horse at his best.

“I have a feeling that maybe I didn’t have him at his best, just a gut feeling he wasn’t in tip-top form,” Fenton said. “Let’s hope we can get him back on track. It’s Cheltenham next. That’s where we’d like to end up. The Neptune would look the more obvious one we’ve made no decision yet.”

One of Ireland’s principal Champion Hurdle contenders, Our Conor, was the subject of an upbeat bulletin from owner Barry Connell yesterday. “Everythings fine and he’s going to have his final preparations now over the next couple of weeks and we couldn’t be happier with him,” Connell reported.