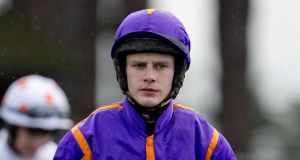 In most yards Townend and Felix Yonger would be front and centre in the spotlight. However the strength in depth among the Willie Mullins team is such that the focus can sometimes escape both of them.

Townend after all is a former champion jockey, and Felix Yonger was the only one to serve up any sort of challenge to Simonsig during his memorable Neptune Hurdle rout.

Concede weight
The horse’s return to action over fences has been mostly faultless, including beating Defy Logic in a Grade Two, but alongside Champagne Fever, Ballycasey and others among the Mullins novice team, he can often slip under the radar.

Felix Yonger is joined by his stable companions The Paparrazi Kid and Balnaslow in the Greenmount Novice Chase, a race in which he has to concede weight but is still officially rated almost a stone clear. Very soft ground many not be ideal but class should still win out.

Townend can also make the Limerick trip pay with Smashing who significantly is dropped in trip for the conditions hurdle but who has plenty of experience of soft ground from France.

Horendus Hulabaloo has some useful graded form on heavy going and that can help Mark Enright’s mount against the two-and-a-half year absent Bless N’ject in the opening maiden hurdle.

Moonshine Lad was an impressive bumper winner at Down Royal and looked set to make a winning debut over flights subsequently at Fairyhouse only to crash out at the second last. A competent round of jumping can see him atone for that mishap in the other maiden hurdle.

Katie Walsh will fancy her chances on Stack The Deck in the bumper, a division Philip Fenton has some useful performers in, making the newcomer Dr Zoom possibly worth a look.