40-1 Alpha Delphini gets photo finish verdict by a nose 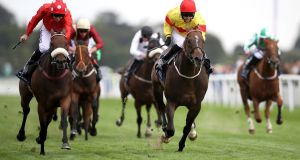 Both the winner and Mabs Cross flashed past the post together and could only be split after a prolonged examination of the photo-finish.

Alpha Delphini eventually got the verdict by a nose with Blue Point in third and the 4-5 favourite Battaash only fourth.

If Lee appeared the coolest person involved it hardly a surprise considering the hard-won perspective secured since his sole previous Group One success on Trip To Paris in the 2015 Ascot Gold Cup.

Just a couple of years ago the former jump jockey - who famously won the Grand National Aintree on Ambeleigh House in 2004 - revealed he had been battling depression.

His struggle temporarily stalled his burgeoning flat career but the 42-year-old once again tasted top-flight success and in a scenario that could hardly be more dramatic.

The odds on a dead-heat to one of the most coveted sprints on the calendar got shorter as each minute of the wait for the verdict passed by.

“The longer we waited I was sure it was a dead-heat,” Lee admitted. “I’m delighted but feel sorry for Tom (Eaves, rider of Mabs Cross.) I’m delighted for the boss, the owners and the horse. Happy days!”

Sioux Nation did best of Aidan O’Brien’s quartet but could only manage eighth behind the winner, a seven year old giving his local trainer Bryan Smart a third career Group One.

Battaash was a huge disappointment in the race again and his jockey Jim Crowley said: “He just didn’t have any kick. I was upsides the winner and he just had no kick today. I don’t know why, I’m gutted. He obviously doesn’t like it up here!”

Earlier O’Brien also failed to strike with The Irish Rover who was fourth to Emaraaty Ana in the Gimcrack Stakes.

Frankie Dettori successfully substituted for the ill Jamie Spencer on the 5-1 winner and the Italian was completing a lucrative 35 minutes having also landed 4-11 odds on Stradivarius in the Lonsdale Cup.

That victory earned the Stradivarius team a £1 million sterling bonus for adding the Group Two to wins in the Yorkshire Cup, the Ascot Gold Cup and the Goodwood Cup.

“I didn’t feel the horse was as good today as at Ascot,” Dettori reported. “Only his courage and class got him through. He’s had a hard season being in every two mile championship race from the start of the season.”