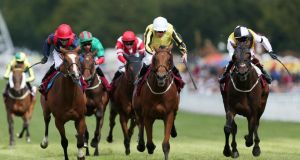 Big Orange teed himself up for a crack at the Melbourne Cup as he continued his improvement with a gutsy win in a three-way finish to a thrilling Qatar Goodwood Cup.

Michael Bell’s four-year-old had won a Group Two over a mile and a half at Newmarket last time out, a performance that earned him a higher official rating than Ascot Gold Cup winner Trip To Paris.

Ed Dunlop’s stayer had a 4lb penalty to contend with this time and ultimately it made the difference between winning and losing, although he lost nothing in defeat, proving his Gold Cup win was not a fluke.

Also in the shake up was Roger Charlton’s Northumberland Plate hero Quest For More. He handled the step up with aplomb but was just beaten in a photo by a neck, with a short head back to Trip To Paris.

Jamie Spencer was on board the winner, and it is difficult to believe that this time last year he was on the verge of announcing his retirement.

John Gosden’s stellar season got better when Shalaa, already an easy winner of the July Stakes at Newmarket, was even more impressive in the Qatar Richmond Stakes.

The juvenile showed great early speed and had burned off his rivals with a furlong to run, allowing Frankie Dettori to coast home to beat Tasleet by two and three-quarter lengths.

Harry Bentley landed his second win of the meeting when Ralph Beckett’s Special Verse stepped up to win the Markel Insurance Fillies’ Stakes, better known as the Lillie Langtry.

Sent off 11-1, she was carrying the Qatar Racing second cap but travelled smoothly and comfortably held off Godolphin’s Hidden Gold.

Richard Hughes can “retire a happy man” after opening his account at this year’s Glorious Goodwood on Gibeon (11-1) in the Land Rover Stakes. The champion jockey bows out on Saturday to begin a training career.