Patrick Donnellan says Clare must focus on their own dressing room

‘They’re a different generation even though they’re only a few years younger than me. It’s a different mentality to what we had. There’s no lack of confidence there, no inhibitions – they’re really mature’ 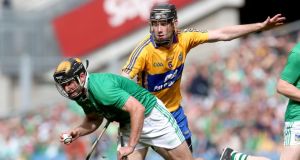 Clare’s Patrick Donnellan in action during the semi-final win over Limerick.

Clare’s emphatic defeat of Limerick has created all kinds of further novelty in what has already been a season of surprises. Next month’s final against Cork will be the first between the counties as well as the first all-Munster final since Clare’s most recent title 16 years ago was won against Tipperary.

It will be the fifth competitive meeting of Cork and Clare this year but team captain Patrick Donnellan says that neither Clare’s positive balance of three to one in those matches nor Cork’s victory in June’s Munster semi-final will be of any relevance on All-Ireland day.

“It doesn’t make a difference. When you get to the final you’re going to meet the best team from the other side (of the draw). All you can do is look after yourself – we have to make sure that we’re at the right level when we go out on September 8th.

“We’ll look after ourselves, and Cork, to a certain degree, are irrelevant because if we look at them too much we’ll lose focus on ourselves. We have to make sure everything in our dressing room is as good as it can be the next day.”

At 28, Donnellan is five years older than the average age of the team and it’s a difference he feels encapsulates more than just experience but the quality of that experience.

“They’re a different generation even though they’re only a few years younger than me. It’s a different mentality to what we had. There’s no lack of confidence there, no inhibitions – they’re really mature.

“They look after themselves well, they train really, really hard and they are winning underage, which is something we didn’t do. They’re coming to senior level with a lot of experience and a lot of big days behind them.”

‘Long-term plan’
But despite the youth and bravura confidence of so many of the team and the county’s record of winning two under-21 All-Irelands in the past four years as well as being favourites for another this season, Donnellan says that no team can be satisfied to chalk down senior opportunities to experience and he disagrees with the concept of teams being ‘ahead of schedule’.

“I don’t know. You have a long-term plan, but every year you go out there’s a competition to be won. If you’re not winning it you can’t justify it by saying ‘we weren’t trying because we’re going to win it next year’.

“You put everything you can into trying to win – Munster and the All-Ireland are the two big trophies on offer each year and we’d be hoping to be there or thereabouts every year regardless of the age of the panel. A lot of teams these days are bringing young lads in. It’s common place.

“We have another bigger game, the biggest game of the year and you have to produce your biggest performance.”