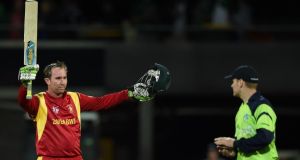 Zimbabwe batsman Brendan Taylor has apologised to the Irish team and John Mooney for comments in one of his nation’s newspapers. Photograph: Indranil Mukherjee/AFP

The Zimbabwe cricket captain has apologised to John Mooney and Cricket Ireland for the “unacceptable” article published by one of the nation’s newspapers referencing the Irish player’s past depression and alcohol problems.

Brendan Taylor says his apology is on behalf of his team after Mooney was brandished an “alcoholic” following his game-defining catch right on the boundary dismissed Sean Williams when he was on 96, with questions arising over whether the Irish all-rounder had touched the boundary rope before touching the ball.

Both Williams and Taylor said afterward the pool B encounter on Saturday that they took Mooney’s word that the catch was good.

Ireland went on to win the game by five runs, eliminating Zimbabwe from the competition and keeping their own hopes of qualification to the quarter finals alive.

The article questioned whether Mooney could be trusted given his off-field history.

“On behalf of the Zimbabwe cricket team.We just want to express our apologies to @Irelandcricket and John Mooney for the unacceptable article” Taylor wrote on his Twitter account late last night.

The article provoked Cricket Ireland to release a statement condemning the article as having “demonstrated breath-taking crassness and a gross error of editorial judgement.

“In relation to the story that has appeared in today’s Zimbabwe Herald, it would be easy to dismiss it as a childish diatribe if it wasn’t for the vicious personal attack on John which cannot pass without comment, and possible action.

“John represents his country with honour, distinction and integrity. That he does in the face of personal challenges about which he has spoken openly and movingly demonstrates incredible hard work and great courage.”

The Zimbabwe Herald is closely linked to Zimbabwe president Robert Mugabe and his ruling Zanu-PF party whilst their sports editor who wrote the piece was banned for life by the Zimbabwe Football Association for his role in a match-fixing scandal involving the Zimbabwe national soccer team losing matches in Asia.