On women’s quarter-final day in SW19, Venus Williams returned to the semi-finals 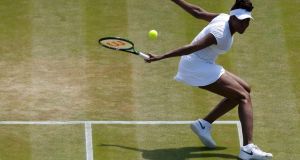 Venus Williams rolled back the years to reach her first grand slam semi-final since 2010 as the American beat Kazakhstan’s Yaroslava Shvedova at Wimbledon.

Williams, who turned 36 last month, is the oldest woman competing at the All England Club but her recent resurgence continued on Centre Court with a 7-6 (7/5) 6-2 victory.

The five-time Wimbledon champion has not made the last four at a major tournament since the US Open six years ago and she will now face Germany’s Australian Open champion Angelique Kerber for a place in the final.

Williams is the oldest grand slam semi-finalist since Martina Navratilova’s run here in 1994 and victory over Kerber would potentially set up a mouthwatering reunion with sister Serena in the weekend showpiece.

“I love playing the game. I always have of course and when you’re winning matches it makes it that much sweeter,” Venus told the BBC after the match.

The siblings last met in a Wimbledon final in 2009 but, unlike Serena, Venus’ success has dwindled in recent years, in part due to her battle with Sjogren’s syndrome, a condition that can cause tiredness and pain in the joints.

It makes her revival all the more impressive, this victory over Shvedova coming after she ended last year in the world’s top 10 for the first time in five years.

An eighth major triumph now stands just two victories away and would surely represent the most impressive of her glittering career.

Shvedova, ranked 96th in the world, is the sixth-lowest ranked woman ever to make the Wimbledon last eight but she had momentum, having already knocked out Lucie Safarova, Sabine Lisicki and Elina Svitolina.

Venus looked in trouble at 5-2 down in the opening tie-break but dug deep, winning five points in a row to take the set.

Shvedova continued to blast her forehand into the corners but she never fully recovered as Venus was left skipping in delight when the Kazakh’s final forehand missed its mark.

“What a day it was against an opponent who was just on fire,” Venus said.

“When you walk to the net as the winner that’s the goal, that’s the dream, and for her in her first quarter-final to play so well, so much credit to her.”

Venus has played Kerber five times before, winning twice, including their most recent meeting at the Canadian Masters in 2014.

Kerber, however, stunned Serena earlier this year to win her first major title in Melbourne and she is in good form again, after beating Romania’s Simona Halep 7-5 7-6 (7/2).

“We’ve had a lot of great matches, she and I,” Venus said of Kerber.

“We haven’t played in a while and clearly she’s had a great year with a great result in a slam but I’d love to be walking towards the final and it’s progress made today.”

Kerber is two victories away from a second grand slam title in 2016 after defeating Simona Halep to set up the tie with Williams.

The German has been up and down since shocking Serena Williams in the final of the Australian Open but has been back on top form since the start of Wimbledon and deserved her 7-5 7-6 (7/2) victory.

Kerber has flown a little under the radar so far but is the only woman left in the draw not to have dropped a set.

This was the most intriguing match-up of the quarter-finals and both women struggled to hold serve in the opening set on Centre Court.

From 1-0, there were eight successive breaks, although no shortage of brilliant rallies, only for Halep to hold serve and make it 5-5.

She could not force a tie-break, though, with Kerber reaping the benefits of being the more aggressive player.

The second set followed a similar pattern, with Kerber serving for the match at 5-3 only for Halep to break and then hold, and this time the fifth seed did hold on for a tie-break.

But Kerber opened up an early lead and did not let it go. A fortunate net cord gave her four match points, and she took the first when Halep hit a backhand wide.

It will be Kerber’s second appearance in the Wimbledon semi-finals after defeat by Agnieszka Radwanska in the last four in 2012.

She told the BBC: “I think we both played a really good match. I’m really happy that I won it because it was really close.

“I’m feeling really good. I’m just enjoying every day here and I’m so happy to be in the semis. I think I’m playing my best tennis right now and I hope I can play a few more matches here.”