Ulster says no to an Irish Hockey League 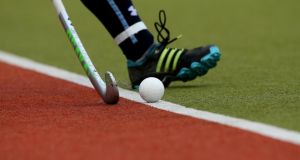 The fallout after the 65-48 vote in favour of the Ulster Hockey Union (UHU) not taking part in the IHL will instantly confound players in Ulster teams, many of whom see the IHL as a step up in standards. Photograph: James Crombie/Inpho

ion by Ulster on Wednesday night not to participate in the proposed Irish Hockey League (IHL) next season is ominous news for the sport.

Imagine rugby clubs in Ulster deciding not to participate in or administer the current All Ireland League. Like rugby, hockey is an all island sport.

At best a branch, Ulster, has rebelled against its parent body, the Irish Hockey Association (IHA) and at worst it could lead to deep divisions between clubs and players in Ulster and between Ulster and the rest of Ireland.

The fallout after the 65-48 vote in favour of the Ulster Hockey Union (UHU) not taking part in the IHL will instantly confound players in Ulster teams, many of whom see the IHL as a step up in standards.

The 2014-15 IHL campaign was set for 10 men’s and women’s teams to compete in respective competitions, moving to an 18-game, full-season format that would take them out of their provincial leagues.

It was with those elite players in mind and Ireland’s push for inclusion in the Olympics that the IHL was proposed in the first place.

As it stands Ulster says that if clubs in their provincial men’s and women’s game participate in the new IHL, they are not welcome to play in any of the competitions currently run by Ulster Hockey.

In addition, Ulster Hockey will not participate in the running or support of an IHL, or, as they put it, there will be “nonparticipation in the administration of that league format.”

The branch will also encourage all of the eligible clubs not to participate in an IHL and stress that it will continue to protect the best interests of all hockey in Ulster as stated in paragraph two of their constitution. It is a clear and unambiguous warning that Ulster does not want to be part of an All Ireland hockey league, although it could have been more damning for the sport had another motion been carried.

The second vote at Wednesday’s Special General Meeting ruled out the setting up of an independent Northern Ireland Hockey Association.

The fact that a motion was on the table in the first place proposing to carry out a feasibility study with a view towards establishing an independent association should deeply concern Irish hockey officials.

There were 68 votes against the total break away but as reported in the Belfast Telegraph, 45 votes supported the setting up of an independent body, or, almost 40 per cent of the voting clubs in the province.

That may come as a shock to the other provinces in the country, that to preserve the Ulster league a large rump of clubs are prepared to consider breaking away from the governing body to establish a new association.

An aside is whether any new association could have achieved recognition from the European and International Hockey Federations. The answer to that is no as they would take guidance from the IHA.

“Clubs made the decision in the autumn on an IHL and those plans have not changed,” said the IHA in a statement.

“The IHA must respect the decision of their members. We’ve no choice. If Ulster want to change that there are procedures in place,” said an IHA board member.

Clubs such as Lisnagarvey and Banbridge in the men’s section and Ulster Elks, Ards and Pegasus in the women’s league will now have to decide what to do. If they participate in the IHL in the autumn, they will be cold shouldered by their province.

If they do not participate in next season’s IHL, they will support Ulster’s parochial concerns, deny players a chance to compete at a higher standard and cut off any route to compete at European level.