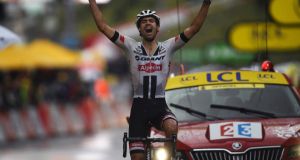 Team Sky’s Froome, who took the yellow jersey in surprise style on Saturday, carries a 16-second lead into Monday’s first rest day after repeatedly snuffing out attacks on the 184.5-kilometre route from Vielha val d’Aran. His group of rivals is dwindling.

Froome finished 11th on the same time, with Nairo Quintana (Movistar) on his wheel.

Martin is third overall, 19 seconds behind, while Quintana is fourth, 23 seconds adrift.

Thursday’s stage to Mont Ventoux is likely the next key one for Froome and his overall rivals. Froome won on the Giant of Provence in 2013 en route to winning his first Tour.

The Briton’s Tour has been better than expected so far, while Alberto Contador could not have fared much worse.

Already in the race lead, Froome’s Team Sky squad were content to allow a large breakaway group, without any genuine overall rivals, to form.

The escape group fragmented on the penultimate climb, the Col de Beixalis, as Team Sky set a furious pace behind and the peloton disintegrated.

Thibaut Pinot (FDJ) led the race over the summit, with eight others closely behind him.

The manoeuvring began in the valley before the 10.1km concluding climb.

Dumoulin made his move, surging clear of his escape companions, who could not keep pace.

Dumoulin now has won stages at all three Grand Tours, after wins in last year’s Vuelta a Espana and May’s Giro d’Italia.

Behind them, Sergio Henao, Froome’s one remaining team-mate, accelerated and Martin followed him.

Porte bridged the gap, with Froome on his wheel. Froome then burst clear, with Quintana shadowing.

Porte caught the pair, then Martin and Yates also followed.

Froome had to respond to any acceleration, with rivals trying to break him. Bauke Mollema (Trek-Segafredo) and Martin were the most aggressive, but Froome held on.

He followed a familiar wheel, that of former Team Sky colleague Porte, to the finishing straight, where Yates accelerated to lead the group over the line.

Contador was one of four riders to abandon on the day.

Mark Renshaw quit due to illness, but given the way Mark Cavendish has won his three stages to date, he should not miss his Team Dimension Data leadout man too much.

Gianluigi Buffon at 43: why messing up is key and what makes him happy 09:39
Manchester City go 15 points clear; Gordon D’Arcy on what we can learn from Italy win 07:36
Gordon D’Arcy: Ireland merely picked through the carcass of Italian rugby 06:00
Munster looking to drive home their advantage on Thomond Park run-in 06:00
Connacht know any chance of catching Munster requires Thomond triumph 06:00