Three Ireland crews in A finals in European rowing championships 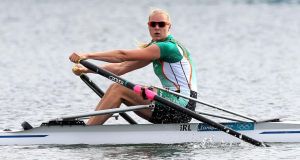 Three Ireland crews reached A finals in Olympic-class boats, and one came within two tenths of a second of a medal at the European Championships in Poznan in Poland. Sanita Puspure was just .17 of a second off matching the bronze medal she won last year in the women’s single scull. She took fifth in a terrific race won by Olympic champion Mirka Knapkova of the Czech Republic.

The men’s lightweight double scull of Paul and Gary O’Donovan had an encouraging start to their campaign in major championships. They mastered the choppy conditions on Saturday to qualify for the final, and then won a battle with Turkey to take fifth in a final won in a new European best time by France. The lightweight women’s double of Claire Lambe and Denise Walsh finished sixth in their final. They had reached it by finishing well in terrible conditions in their semi-final on Saturday.

Sinéad Jennings finished fourth in her semi-final of the lightweight single sculls. She was recovering from a rib break which hampered her on-the water work this year. “I just don’t have the mileage in me,” said Jennings. She finished second in the B Final on Sunday, eighth overall in her first major championships in seven years.