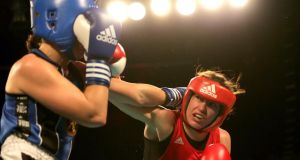 Katie Taylor secured yet another victory on Friday night.

The current Olympic and World champion beat Canada’s Caroline Veyre on a unanimous decision at a sold-out Mansion House in Dublin.

Paris-born Veyre, a graduate of Montreal University, took a standing count off a rapid-fire Taylor combination in the third. The Canadian champion was a late replacement for US champion Clarissa Parker who withdrew because of travel issues.

"Not knowing really anything about her was a bit of a problem, but you just have to deal with these sort of things," said Taylor afterwards. "Caroline is a good fighter and she has a great future ahead of her. I thank her for taking the fight.
"I felt comfortable in there and it was good to get things going again after not having had a fight for nearly five months, since the European Union Championships in Hungary in early July.
"Next year is a really big year with both the European Championships and the World Championships and I'm really looking forward to both of them."