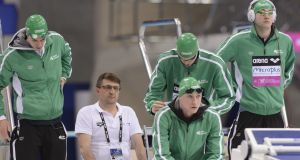 Ireland’s mens 400 metres Medley Relay Team finished in seventh place in the final on the last day of competition at the European Swimming championships at the Aquatic Centre in London, home to the London 2012 Olympic games.

Swim Irelands’ High performance Director Peter Banks was hoping that the quartet of Shane Ryan, Nicholas Quinn, Brendan Hyland and Curtis Coulter would put in a performance that would get them a place at the Olympic games, based on world rankings.

However despite having put in a display that saw the squad break the Irish record twice in one day, their time in the final of three minutes 37.48 seconds probably won’t be good enough to make Rio this summer.

Thus at this junction Ireland have just the three swimmers, Ryan, Quinn and Fiona Doyle, who was 12th overall in the women’s 50 metres Breastroke on Saturday, qualified for Rio in August.

Diver Oliver Dingley has already qualified for the Olympics’ after a recent world cup event in Brazil while Limerick’s Chris Bryan will attempt to qualify for the Games in the 10K Open Water Olympic qualifier at Setubal in Portugal in June.

Ryan, Quinn, Hyland and Coulter had set a new Irish senior record of 3:38.40 in the morning heats to progress to the final in seventh place overall.

The quartet then put in a faster performance in the final to set yet another Irish record and again claim seventh place overall in a race won by Britain in 3.32.15 - with France taking the silver and Hungary the bronze.

Ryan led off the relay on Backstroke recording 54.37 seconds while Nicholas Quinn was close to his best on the Breaststroke leg in 1:01.01.

Hyland clocked 53.35 seconds on the Butterfly while Curtis Coulter, on freestyle, swam a speedy 48.74 to anchor the squad who were narrowly pipped for sixth by Sweden.

The medley squad were the only Irish swimmers in action on the final day as Sycerika McMahon, who had poor European championships, withdrew from the heats of the women’s 400 metres individual medley on Saturday morning

With the relay squad making the final, Ireland had one of its best European Championships in recent years as they competed in competed in four finals and six semi-finals with Doyle just missing out on a medal in the 100m Breaststroke last week when she finished fourth.

“Although we did not get any more qualifiers for Rio, the squad showed great leadership in making semis and finals along with the 4x100m Medley Relay,” said Banks.

“We featured in every evening finals session and the athletes that are part of this squad will all be part of some great future Irish teams.”

Ryan, Quinn and Doyle now travel to a training camp in Barcelona, before competing at the Mare Nostrum meet on the 11th and 12th of June.