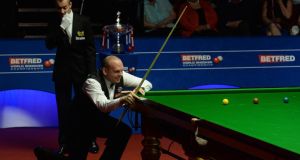 Stuart Bingham reacts as he comes close to making a 147 break in the World Championship Final against Shaun Murphy at the Crucible Theatre in Sheffield. Photo: Anna Gowthorpe/PA Wire

Stuart Bingham was producing the best snooker of his life in the biggest match of his career and almost made a maximum break as he moved within sight of the Betfred World Championship title.

Widely considered a journeyman cueman for much of his career, Bingham had a stunning afternoon as he powered 14-11 in front of Shaun Murphy, needing four more frames to land the trophy for the first time.

He was described by World Snooker chairman Barry Hearn on Monday as possessing a “beautiful ordinariness”, but there was nothing ordinary about Bingham’s performance against Murphy, who at one point on Sunday had led 8-4 but to his alarm suddenly faced a stiff challenge to revive his victory hopes.

Murphy had dressed up for the occasion, wearing a suit so bold that it almost demanded he produce top form. But the red trousers and accompanying gold-backed waistcoat, with black shirt and shoes, only highlighted his shortcomings in the session.

As the last frame of the session slipped away, Murphy’s face was turning red too, surely seething about his display.

With Murphy’s game deteriorating, Bingham found exceptional form, and after closing the gap to a single frame overnight, on Monday he strung together four frames in succession to open a shock 12-9 mid-session interval lead.

It meant the 38-year-old from Basildon, the oldest first-time finalist at the Crucible since Ray Reardon, had taken eight of the last nine frames, and he protected his three-frame cushion as they split the next four.

As the match turned so drastically, Bingham looked entirely unfazed. He had said before the final that he barely cared how he would perform, so thrilled was he to reach the final two days of the tournament.

He skilfully dropped in 14 reds, each time followed by the black, but ran cruelly out of position as the magical 147 figure approached.

From the black, he looked to nudge the 15th red, by a side rail, towards the middle pocket, but nestled up so close with the white that it became almost impossible to pot. Bingham did his best to cut the ball home, but it was beyond him.

Had he made the shot, added the black and followed up with the colours, it would have been worth £30,000. He and 32-year-old Murphy, who took this title in 2005, were playing for a cheque of 10 times that amount, and maximum or not it took Bingham further clear.

Murphy joined in the applause for the break. A 147 would have been the 11th maximum in World Championship history, and the first in a Crucible final.