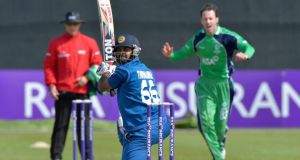 Much of the build-up to the opening game of the RSA Insurance One-Day Series concerned how Sri Lanka would handle a cold and bleak day in Dublin 3 in the middle of May.

In the end it was Ireland that froze on the big occasion as a middle order collapse that saw four wickets fall in 26 balls put an end to their hopes of chasing down a moderate target of 220 as they lost by 79 runs after being bowled out for 140, Ireland’s lowest in an ODI in Clontarf.

Ireland’s reply was not too hot in its early stages either as Paul Stirling played onto his stumps from the bowling of Nuwan Kulasekera the ball after hitting him for the first boundary of the innings in the second over.

That brought the in-form Ed Joyce to the wicket, but his 500-odd first-class runs in England didn’t translate to the international stage this time around as he edged Suranga Lakmal behind for a duck.

Niall O’Brien signalled his intent by opening with a two and a four and took an aggressive approach to Sri Lanka’s seamers in the gloomy afternoon conditions.

Along with skipper William Porterfield, he helped to settle Ireland down as the two left-handers developed a decent partnership that had the home side well up with the run rate just in case the forecast rain arrived.

Ajantha Mendis made his name as a mystery spinner, bringing the carrom ball delivery flicked off his middle finger back into fashion. The first mystery here was whether he could get enough heat into his digits to unleash his bag of tricks, but he managed admirably, firstly ending Niall O’Brien’s stay after he was trapped leg-before after he made 33 to leave Ireland on 63 for three in the 19th over.

There was no need to panic with a long batting line-up still to come, but that’s exactly what happened in the next over as Porterfield called a single but changed his mind to leave Gary Wilson stranded mid-wicket.

Kevin O’Brien holed out first ball to Lakmal for a duck soon after and Ireland’s dismal run was complete with Stuart Thompson was bamboozled by a Mendis delivery and trapped leg-before for one.

It left the home side in a hole on 74 for six and any remote chance they had ended when Porterfield slogged Mendis down the throat of Kusal Perera, his 37 runs coming from 87 deliveries.

Ireland’s tailenders did hang around as the weather brightened, the last four all making double figures, up but it was little consolation for the healthy crowd, bar the loud and colourful Sri Lankan fans at the Killester end of the ground.

Porterfield denied that his side had panicked just as they looked set to launch a real challenge, but he did point to Mendis’s spell as being key to the outcome.

“I wouldn’t necessarily say panic, but those three wickets really set us back. If we had have got through Mendis’s spell with minimum loss I think we would have set ourselves up and have been in a very good position to come home strong. We’ve just got to pick ourselves up and come back on Thursday.”

Ireland’s seam attack had excelled in the early morning conditions after Porterfield had won the toss, reducing Sri Lanka to 95 for five in the 30th over.

But Ireland will again look back on how the visitors broke free over the final 10 overs, adding 81 runs, including 52 in the last five to push their total past 200.

Tim Murtagh excelled in conditions right up his street, taking a wicket in first and last overs in for figures of two for 21.

Max Sorensen was the only Irish bowler to not take a wicket, while there were some fine catches, the pick coming from Kevin O’Brien with a diving effort to get rid of Perera off Murtagh and a stunning one-handed effort as he held on to a return catch from Dinesh Chandimal after he had made 39.

Coach Phil Simmons had talked about his side’s issues with killing off teams from the positions such as yesterday, but Sri Lanka’s lower order applied themselves with Ashan Priyanjana’s 31 and Nuwan Kulasekera’s unbeaten 42 from 34 balls at least setting a meaningful target.

It proved more than enough in the end, with Ireland’s batting failing in a home game for the first time in a while. They will get a chance on Thursday to make amends.

U Tharanga c Wilson b Thompson 24

A Priyanjana c Joyce b Dockrell 31

Did not bat: S Lakmal

A Cusack b Lakmal 10

G Dockrell not out 18

Man of the match: Ajantha Mendis..