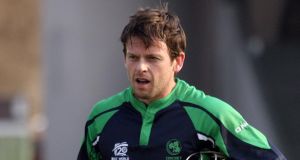 Ed Joyce: believes Ireland have an excellent chance against Sri Lanka as conditions will not be to their liking. Photograph: Barry Chambers/Inpho

Ireland coach Phil Simmons has kept to the players that took part in the recent World Twenty20 in his 13-strong squad to take on Sri Lanka in the RSA Insurance ODI series games at Castle Avenue on May 6th and 8th.

Ireland suffered a shock defeat to the Netherlands and lost out on a place in the Super 10s stage of that tournament in Bangladesh, where Sri Lanka beat India in the final.

Ed Joyce is in line to face Sri Lanka for just the second time in a one-day international after making his last appearance for England against them at the 2007 World Cup in the Caribbean.

The 35-year-old from Bray, who has scored three first-class centuries for Sussex in a fine seasonal start, believes that Ireland have a great chance to score a first home ODI success over a Full Member in Clontarf.

Jacob Murphy snatches a point for Newcastle at Wolves 19:14
Munster ring the changes again for Cardiff’s visit 19:12
Camogie: Rockett fires two goals as Waterford edge closer to quarter-finals 19:00
Dan Martin back to third in Vuelta after a wet and wild Stage 6 18:51
Meath sub Jordan Morris earns his side a late draw with Monaghan 18:23
Here is your handy guide to sport on television this week