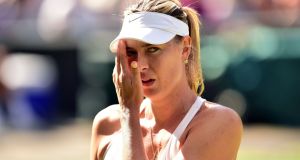 Maria Sharapova’s racket sponsor is backing the grand slam winner and is planning to extend its contract with her despite admitting to failing a drugs test. Photo: Dominic Lipinski/PA Wire

Tuesday was careers night in De La Salle Churchtown and someone made a slight miscalculation by inviting me along. If the purpose of my rallying call was to champion the merits of sports journalism then what they heard instead must have sounded defeatist. Even before talking salaries.

“So what college qualifications would you advise?” asked one bright-eyed pupil. There is no such thing as the right or wrong way into sports journalism, only the lucky way, although my advice on the night was to start with a science degree.

It didn’t help that most of the sporting headlines of the day were about meldonium, the hormone and metabolic modulator that was about to cost Maria Sharapova a truck load of money – if not her legacy as one of the best tennis players of her time. Not that sports journalists needed a science degree to understand meldonium is not a substance designed for athletes.

Still it seems there is a problem understanding the difference between what is designed for these prized athletes and what isn’t – and is therefore considered performance enhancing. And it’s a problem that’s only going to get worse. The reaction to Sharapova’s positive test showed how opinions varied: former World Anti-Doping Agency (Wada) chief Dick Pound describing it as “reckless beyond description”, while one of her sponsors, Head equipment, reckoned her honesty in admitting the positive test was “admirable”. In some ways both opinions are justified.

Not since caffeine was added and then removed from the Wada banned list has there been more debate about a decision like this. It the meantime, Wada have since put caffeine back onto their list of substances being monitored, albeit in-competition only, and it will be interesting to see what level of use may or may not be revealed, given the practically addictive use of caffeine among athletes.

Part of the problem with meldonium is that it was only added to the Wada’s prohibited-substance list on January 1st, and for every substance that is prohibited for their performance-enhancing qualities (such as clenbuterol) there are countless other performance-enhancing substances which are not (such as caffeine). The science behind all that will never be totally clear and all we have to go on for now is that Wada list.

It certainly wasn’t clear after my college degree, which was in science by the way – before the sight of freshly donated cadavers eventually diverted me down this career path. But at least it provided me with some of the science behind substances such as EPO before most sports journalists could even spell it.

This week there have been a lot of sports journalists talking about the science, only sometimes with a few slight miscalculations. There seems to be an idea among some that prized athletes shouldn’t be taking anything that might enhance their performance, legal or not. But if part of this concern is the so-called “medicalisation” of sport then they only need to look at society, not just in terms of our play, but our work and rest too.

The problem there is only going to get worse: insomnia, hair loss, mild anxiety, high cholesterol and even sexual performance are just some of the conditions which don’t necessarily require medicinal treatment, but get it.

It also seemed that one of the few prized athletes to recognise these issues was Colin Jackson, who sat in front of me this week and listed off the substances he took to enhance his performance throughout his career: creatine, glucosamine, carnitine, B-complex vitamins, and a supplement called ACE, which was calcium, zinc, Vitamin A. “And that’s it,” he claimed. “They were the only things I took as athlete. And I took them all the time.”

None of these, crucially, are considered illegal according the Wada prohibited-substance list, nor indeed are they are ever likely to be: the important thing, for now, is that Jackson felt comfortable enough to recognise the difference, and that was almost 20 years ago, when he was at the peak of his powers.

What Jackson also recognised was that understanding the difference between what is not designed for these prized athletes and is therefore considered performance enhancing is not an exact science, nor is it ever likely to be. And that’s before raising the notion of ethics.

It’s almost 30 years now since Charlie Francis first declared that anabolic steroids were not banned because they were unethical; anabolic steroids only became unethical because they were banned. This was his way of justifying why many of his athletes, particularly Ben Johnson, were encouraged to take steroids, and not worry about what is right and wrong. Francis had a disturbingly unapologetic attitude towards doping, partly on the assumption that the rules that govern sport were never black and white, nor are they ever likely to be.

Nothing about the Sharapova case has changed any of that, other than providing yet another reminder that even a sight miscalculation on what is deemed legal and what is not can still carry a career-ending price. And that Wada may well have created another shade of grey in banning meldonium.