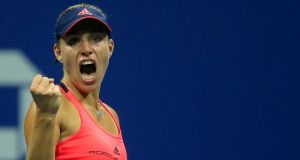 Angelique Kerber: favourite to beat Karolina Pliskova, even though she mysteriously lost her way in her last big final at the Olympics. Photograph: Chris Trotman/Getty Images

Serena Williams is struggling with a leg injury that threatens to curtail her season as well as with darker forces that seem to be eating away at her sense of contentment. Unfortunately, this is all happening at a time in her long and multi-titled career when she should be on top of the world.

She will not be in that position in the rankings any more, after losing to Karolina Pliskova in straight sets in the semi-final. Furthermore, her tetchy refusal to talk about it after falling short of history for the second year in a row has slightly soured the final weekend of the tournament.

In 2015, it was Roberta Vinci, the Italian doubles star, who stopped her run in the semi-finals. On Thursday night, it was the Czech power-server Pliskova, who was grateful of a closing double fault by Williams that gifted her a spot in the final. Neither event was expected.

However, while they are both worthy finalists, Kerber and Pliskova will try to win today for the first time the title Williams has won six times. The 34-year-old queen of tennis leaves the stage somewhat ungraciously, which is a shame, because there is such an enormous amount of goodwill for her.

What Williams should know, but might not appreciate, is that a lot of fans, and not just her compatriots, wanted to see her pass Steffi Graf’s mark of 22 majors.

Everyone wants to witness a piece of history, but defeat in straight sets on one good leg was doubly painful because it also brought to an end her top ranking after 186 straight weeks, the same as Graf’s record run.

It is as if history will not bend to her will and she is struggling to cope with the battle.

“I wasn’t at 100 per cent, but I also think she played well. She deserved to win,” Williams said.

It was not exactly a brass-band ringing endorsement. For Williams, Kerber and Pliskova are opponents to be respected but kept at a distance. There was no way, she said, that would she talk about the rankings.

Her close friend Wozniacki, who has been number one but has never won a major, was less reluctant to discuss the situation.

“It’s not a lot of people who have been number one. It’s a huge thing. [Kerber] definitely has a target on her back now. Everyone wants to beat the number one player in the world,” she said.

While reputation and achievement favour Kerber, the force is decidedly with Pliskova. Wozniacki said of her: “She’s had a great year. She gets a lot of balls back. She also knows how to change the pace. She gets good angles.”

Kerber is the favourite, even though she mysteriously lost her way in her last big final, at the Rio Olympics against Monica Puig, and lost four matches in a row after beating Williams in Melbourne.

It should be noted that Pliskova not only bullied the ailing Williams out of contention in straight sets, but she might have Kerber’s number. The new world number one is among the 11 players who have lost to her on a run stretching back to the start of the Cincinnati Open. Pliskova bossed Kerber in that final and will draw on that for inspiration on Arthur Ashe Court.

She hinted after this semi-final how she might play against one of the best grinders in the sport: “I didn’t want to get into long rallies with Serena.”

This could be a short, brutal match. If so, Pliskova will be the new champion. Guardian Service