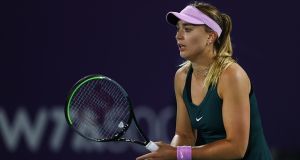 Paula Badosa has tested positive for Covid-19 and has been unable to train ahead of the Australian Open. Photograph: Francois Nel/Getty Images

Spain’s Paula Badosa has not received training equipment to help her prepare for the Australian Open because of safety concerns but discussions are taking place on finding a way to get her some, health officials said on Tuesday.

Badosa was the first player to reveal she had tested positive for Covid-19 in quarantine in Melbourne ahead of the Grand Slam tennis tournament and was moved to a “health hotel” last Thursday to begin two more weeks of lockdown.

The 23-year-old on Monday described her extended period of quarantine as the “worst experience” of her career, adding that she was suffering from anxiety and claustrophobia.

The world number 67 complained that she had not received any training equipment and had been limited to doing sit-ups and using water bottles for weights in a windowless room she is sharing with her coach Javier Marti.

“Our priority is supporting the health and wellbeing of those in our care and reducing the risk of transmission to protect staff and community safety,” a Covid-19 Quarantine Victoria (CQV) spokesperson said.

“We are supporting the delivery of exercise equipment wherever possible and safe to do so from both a health and IPC [infection prevention and control] perspective.

“CQV is in ongoing discussions with Tennis Australia about suitable equipment that can be delivered to positive and symptomatic residents, given that the equipment can’t be reused and would need to be safely destroyed.”

The Grand Slam, which has been delayed by three weeks due to the disruption caused by the pandemic, will be played from February 8th-21st.

Badosa arrived in Melbourne after playing in Abu Dhabi earlier this month and was on her seventh day in quarantine when her test came back positive.

The Spanish player said if she was confirmed to have the more transmissible coronavirus variant first detected in the United Kingdom, she would not be let out until February 5th when it would be “impossible” to get ready to play.

As many as 72 players have been confined to hotel rooms for two weeks after passengers on three charter flights taking them to Australia tested positive.

The organisers said they are in regular touch with Badosa but due to her positive test the restrictions were tighter on what was allowed in her hotel room than on the other players in hard lockdown.

“We have exercise equipment ready and waiting for her, and will continue to work with the health authorities on finding a solution for this to be delivered to her room,” a Tennis Australia spokeswoman said in a statement.

Meanwhile, the Court of Arbitration for Sport (CAS) said on Tuesday it has begun hearing an urgent appeal by the provisionally suspended Dayana Yastremska so a decision can be taken about her participation at next month’s Australian Open.

Ukraine’s Yastremska was suspended earlier this month after the World Anti-Doping Agency found a banned substance in an out-of-competition urine sample she submitted.

The International Tennis Federation had denied Yastremska’s application to have the suspension lifted even as the world number 29 was preparing to compete in the year’s first Grand Slam, which begins on February 8th in Melbourne.

“The CAS arbitration has commenced and the parties have agreed to an expedited procedure in order to enable a sole arbitrator to issue a final decision by February 3rd,” the CAS said in a statement.

Yastremska, who travelled to Melbourne and is currently in quarantine, had denied using performance-enhancing drugs and said the positive test was the result of a “contamination event”.

Controversial tennis great Margaret Court has revealed she was not invited to this year’s Australian Open, and says her Order of Australia award was a long time coming.

The 78-year-old’s feats on the tennis court are unquestionable, with her 24 grand slam singles titles still the world benchmark. But her views on the LGBTQ community and her fierce opposition to same-sex marriage have drawn angry criticism.

Her latest Order of Australia award has further stoked the fire, but Court does not regret accepting the honour.

“No, because I loved representing my nation,” Court told 3AW on Tuesday. “When I got the AO it was for my community reach area. We put out 75 tonnes of food a week. And this was for my tennis, and I think it was a long-time coming.

Controversy raged when Court accepted Tennis Australia’s invitation to the 2020 Australian Open to celebrate the 50th anniversary of her 1970 grand slam sweep.

Court said she had not received an invitation for this year’s tournament, and would not have accepted it anyway due to various factors.

“I’m not coming to the Australian Open. No, I wasn’t invited,” Court said. “With coronavirus, we’ve been so busy with our community work. I haven’t even thought about it.”