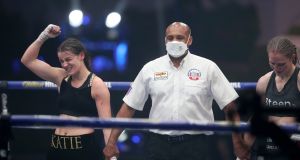 Katie Taylor’s undisputed popularity in Irish sport is once again reflected on three fronts, the Bray boxer identified as the country’s most admired athlete, her exploits in the ring also coming up top in the greatest Irish sporting achievement and most memorable Irish sporting moment of 2020.

Taylor’s enduring appeal is among the key findings from the Teneo Sport and Sponsorship Index (TSSI) for 2020, which also saw the Dublin footballers identified as Team of the Year, ahead of the Limerick’s All-Ireland winning hurlers.

In 2019, the Dublin men’s team came out joint favourites along with the women’s hockey team, who qualified for the Tokyo Olympics. It was close again, Dublin, who further extended their historic run by beat Mayo in the final just before Christmas, getting 24 per cent of the vote - only one percent ahead of Limerick, on 23 per cent.

The TSSI is a 1,000-person nationally representative survey, with quotas imposed across gender, region, age and social class, which examines the Irish general public’s attitudes towards sport and their sporting achievements.

Gaelic Games held on to top spot as Ireland’s Favourite Sports on 24 per cent, ahead of soccer on 14 per cent with rugby rounding out the top three on 13 per cent.

Taylor also makes it a four in-a-row of wins in Ireland’s most Admired Sport Star category, holding on to the title she took in 2017, 2018 and 2019; her win over Persoon last August was chosen as the most memorable sporting moment of 2020.

This moment picked up 32 per cent of the public vote, ahead of her nearest rival, cyclist Sam Bennett, who provided one of the highlights of the 2020 Irish sporting calendar with his dramatic sprint victory on the final stage of the Tour de France in Paris, getting 15 per cent of the vote. Tipperary winning their first Munster SFC title in 85 years was next best with 11per cent

“Katie Taylor remains undoubtedly our favourite sport star and she is Ireland’s most admired for the fourth year in succession”, said Rob Pearson, a director at Teneo Ireland. “Her ongoing excellence in the ring continues to capture the imagination of the general public and along with Dublin’s women’s footballers strong showing in the Team of the Year category, it proves once again the appetite for women’s sport amongst Irish people.”