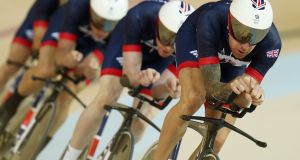 Bradley Wiggins trains with his team-mates at the Rio Olympic Velodrome, where he will hope to win an eighth Olympic medal. Photograph: Bryn Lennon/Getty Images

Bradley Wiggins no longer plays in a tribute band for The Jam but in another Olympic summer, the Londoner’s ambition remains the same. He is bulkier now and is sporting an obligatory ink-sleeve on his right arm, visible under the team GB skin suit when they go in today’s team pursuit in the velodrome. There hasn’t been much trumpeting about this but if the British men can win this event, it will give Wiggins a fifth Olympic gold and an eighth medal in total, making him the most decorated Olympian in British sports history.

Team coach Heiko Salzwedel has confirmed that Wiggins and co-racers Ed Clancy, Owain Doull and Steven Burke have been flying at training, regularly shading the standing world record. Wiggins has already stated that anything less than gold will be disappointment and ratcheted tensions between Britain and rivals Australia, who won the world championship in London.

The bluntness of the observation was classic Wiggins as he makes a return to his natural home on the track, on which he won gold in the individual pursuit in Athens and gold in both individual and team at the Beijing games four years later. Then he decided to switch to road racing: within a year, he had finished fourth in the Tour de France, a result that was subsequently elevated to third after Lance Armstrong’s results were annulled. Wiggins touched on that season when forecasting his future in the sport.

“This retirement thing . . . the way I feel, I could go on until Tokyo. The last 12 months have been the most enjoyable for me in a long, long time. Probably since the year I spent at Garmin when I came fourth in the Tour out of the blue.

“The improvements I’ve made: I’m TP-ing better than I was eight, 10, 12 years ago. I’ve really stepped up my own individual performance. I’m a better athlete than I was 16 years ago or even eight years ago. Since Beijing that line of progression has continued. Touch wood, I’ve been fortunate in that I don’t really suffer with bad knees or a bad back, like Chris Hoy was struggling with going into London. So I almost think that I could go on for another four years. Whether I do or not is another thing.”

Salzwedel also believes Wiggins could still be an elite racer at 40. For the past year, Wiggins has been busy remoulding his physique to suit the demands of the team pursuit.

Gone is the emaciated mod who was the toast of the London Olympics four years ago. His weight has jumped from 71kg to 83kg , essentially reversing the dramatic weight loss which transformed him into the premier road racer of 2012 and culminated in an Olympic gold to match his famous Tour de France win in the same summer.

Overnight, Wiggins shot to fame – and boasted the most famous set of sideburns in a country lifted into a state of euphoria by the Olympics. Cycling had never been fashionable and Wiggins found the intensity of the fame uncomfortable.

“My whole life had been mapped out until August 2nd – the day I won the Olympic time trial – but no one said what was going to happen next,” he told the Telegraph.

“It wasn’t all the celebrity stuff. It’s the other side that people don’t see. Your privacy and your children. They were seven and eight when all that happened and not old enough to understand why everyone wanted a piece of their dad.”

He has rediscovered himself in returning to the track. The decision to omit Mark Cavendish from the team pursuit has caused some internal tension, with the Manx road specialist admitting his acute disappointment. “But that’s how it works,” said Cavendish. “Especially Brad, he has been super stressed. He wants to be the hero and all that.”

The remark could re-ignite a relationship that has always been turbulent but the thing about Wiggins and the Olympics is that the hero-stuff tends to work out for him.