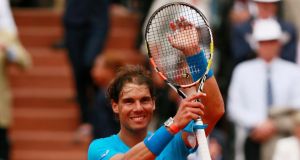 Rafael Nadal cruised to a straight sets victory over Quentin Halys in the first round of the French Open. Photograph: Reuters

Rafael Nadal showed few signs of weakness as he booked his place in the French Open second round with a straight sets win over French wild card Quentin Halys.

Nadal is bidding to win his 10th title in 11 attempts at Roland Garros but the Spaniard is considered more vulnerable this year, following his worst ever build-up to the tournament.

There was little to concern the nine-time champion on Philippe Chatrier, however, as Nadal claimed a 6-3 6-3 6-4 victory in one hour and 50 minutes.

Dropping to number seven in the world rankings, Nadal is due to face top seed Novak Djokovic in the quarter-finals before a potential last four match-up with Britain’s Andy Murray.

It means there will certainly be tougher tests to come than Halys, who is ranked 296th in the world and was playing his first ever match in the main draw of a grand slam.

Nadal, however, will take confidence from an accomplished performance in which the 28-year-old unleashed a number of signature forehands and looked physically at ease throughout.

Two early breaks allowed Nadal to storm into a 4-1 lead and while Halys found his rhythm to take a break back, Nadal broke again to close out the set.

Halys was happy to attempt winners from all over the court and he set up a break point in the third game of the second, but a missed backhand pass saw the opportunity go amiss and it was Nadal who claimed two more breaks to move two sets clear.

The French gave the home fans several moments to cheer in the latter stages with a number of audacious forehands but Nadal broke again before sealing a comfortable victory.

Nadal, who will face either fellow Spaniard Nicolas Almagro or Ukraine’s Alexandr Dolgopolov in round two, paid tribute to Halys after the match.

“Quentin is the future, the new style of game he has, trying to hit winners from everywhere — that is the way tennis is moving now,” Nadal said.

“Playing at Roland Garros and on centre court for the first time is not easy, so I wish him all the best.”